The spanking-new 2018 Chevrolet Equinox made a pretty good first impression when we drove the 1.5-liter powertrain that’s expected to account for three-quarters of sales of the popular midsize CUV. Praise was heaped upon its impressively lightened, taut, and responsive chassis; it has sleek looks inside and out and impressive feature content. Our biggest gripe during that drive was with the aging six-speed automatic and its strong contribution to what turned out to be pretty middling performance a month later. 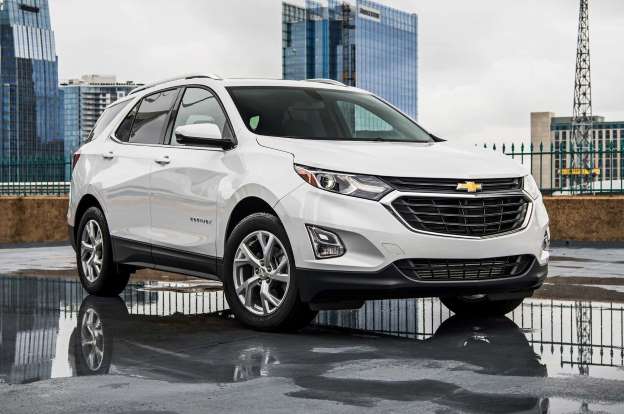 These problems, it turns out, are a snap to fix: simply tick the order box marked 2LT on either the middle LT or top-drawer Premier trim level. Doing so adds a half-liter of displacement to the turbocharged four-banger and three ratios to the transaxle. This harnesses an extra 82 horses and 59 lb-ft of torque and magnifies the transmission’s leverage considerably. Chevy quantifies the improvement by estimating the juicier powertrain will drop 060 times by 2 seconds from the 9.2 we measured on the 1.5-liter six-speed (comparing front-drive models). And although folks shopping for midsize crossovers might not obsess over 060 or quarter-mile times, any nuclear family with a cargo hold full of weekend gear will appreciate the comparative effortlessness with which the 2.0-liter Equinox leaps around long semis on a two-lane road. Even driving with only two people onboard, the 1.5-liter had me looking for super long openings and/or hoping for downhill opportunities with a tailwind.

Credit for this performance goes to the nine-speed automatic in roughly the same share as the six-speed earned blame with 1.5. Cruise along at 50 mph in ninth gear at 1,200 rpm, and drop the hammer to pass. The trans orders up a direct downshift to fourth, landing the engine at 4,800 rpm. At that point some 225 horses start galloping after a fraction of a second of turbo spool-up. There’s still another 700 or so revs to go before reaching the peak of 252 hp, and a redline upshift happens at 68 mph. Repeating this procedure at 65 mph delivers the exact same results: 4,800 rpm in fifth with a redline shift at 87 mph if you keep your foot in it.

Ah, you might be asking, “but at what price does the 2.0-liter/nine-speed package solve the Equinox’s problems?” Short answer: $2,395. That’s the upcharge on a front-drive LT, and it includes a 3,500-pound trailering package (the 1.5 and the forthcoming 1.6-liter turbodiesel are rated at 1,500), 18-inch wheels, and dual exhaust. The upcharge is $4,340 on an LT with AWD, but only because it includes the $1,945 Driver Confidence and Convenience package (safety warning systems, vented eight-way seats, heated rear seats). The price premium is $400 higher on the Premier model to cover a set of fancier machined 19-inch wheels. Trust me—if you’re consulting Motor Trend, you’re going to want the 2.0-liter/nine-speed. Pay for it by talking yourself down from the Premier to the LT trim grade, and you’ll save enough to add back some of the toys as optional extras. This power team makes a good crossover great.