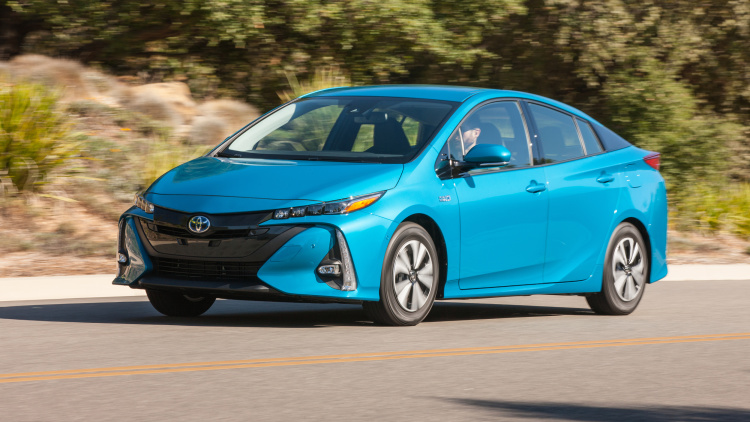 It’s a fair question to ask if buyers of a new 2017 Toyota Prius Prime will be disappointed when they stomp on the gas pedal. After a day spent behind the wheel of the way, way updated version of the Prius Plug-In, we’re guessing the 0-60 acceleration time is a leisurely 10 seconds or so. Toyota hasn’t provided any official times, but it’s perfectly clear that the Prime is not a quick car. It does, at least, feel quicker than any other Prius. But is anyone going to care?

Toyota has spent over a decade defining what a “Prius” is in the minds of consumers: a hybrid, “the” green car, and a reliable way to use less gas than your neighbors do. As some point that ideological space got crowded with cars like the Tesla Model S, the Chevy Volt, and any number of gas-electric hybrid offerings. In response, Toyota is trying to shift the conversation over to the hydrogen future with the Mirai. But Toyota is not neglecting the vehicle and brand that got it this far down the green trail.

Toyota claims that this is the best Prius it’s ever made, which is why it was christened the Prime (when asked, no one would divulge which Prius is then the worst, but I’m sure someone will suggest an answer in the comments). You can never take PR spin at face value, but it’s hard to combat this particular assertion. It’s more efficient than any other Prius ever made, save for the Eco trim for the new standard Prius, and it comes with 25 miles of electric range from to a new 8.8-kWh lithium-ion battery. Despite some disagreement about the design, especially around the front end, this is the best-looking Prius available. I’m pretty sure it looks better than the regular Prius, from every angle. All that you lose is a fifth seat, a rear wiper thanks to a cool-looking but wonky rear window (Toyota calls it “dual wave”), and some extra money.

You’ll be forgiven if this next part is a bit confusing (as it was last time). The Prime offers six different “modes,” but they’re really grouped in two sets of three, and each set can be toggled through independently of the other. On the one side, there’s EV, HV, and EV Auto. On the other, there’s Eco, Normal, and Power. EV Mode is the setting you want in order to prioritize electric driving, and you have to either go over 84 miles per hour or really stomp on the pedal to get the gas engine to come on. HV mode tells the Prime to pretty much operate like a normal Prius, drawing power from the gas engine and battery pack as needed, while EV Auto mode switches between EV and HV mode automatically. The good news is that EV is the default (as it should be), and I can’t really think of a reason why you wouldn’t just keep it in EV mode all of the time.

Speaking of trim levels, there are three different Primes to choose from: Plus, Premium, and Advanced. All Primes will come with a version of the Toyota Safety Sense suite installed. This is the P level, which is what Toyota uses for its midsize and large vehicles. With TSS-P, you get pre-collision warning, lane departure alert with steering assist, and a warning when the vehicle starts to sway and the car thinks you might be tired.

Put this all together and you have, without a doubt, the best Prius ever. High fuel economy? Check. More electric range than ever before? Check. A sweet safety suite? Check. Of course, the best won’t be the best for long, and there are changes – big and small – on the horizon. On the small side, things like the missing fifth seat are likely to change some day.

Previous post Replicas – To trust or not to trust?