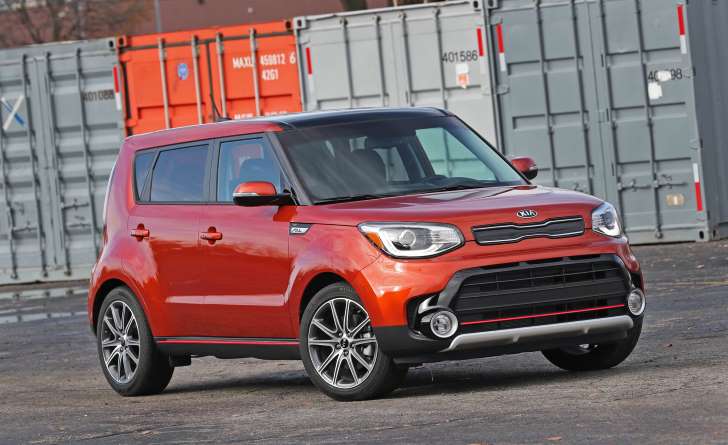 We generally support the notion that adding power improves any vehicle, even if every car need not rearrange your innards with g-forces in order to be fun. A case in point is the updated 2017 Kia Soul, which finally is available with a perky turbocharged engine that not only brings a significant boost in performance but an altogether more thoroughly executed feel.

Limited to the range-topping “!” model (Exclaim, in the Kia-verse), the Soul’s new turbo setup starts at a reasonable $23,695. While that’s nearly $7K dearer than the base Soul (and $1545 more than last year’s non-turbo Exclaim), the upcharge includes Hyundai and Kia’s corporate turbocharged 1.6-liter inline-four making 201 horsepower and 195 lb-ft of torque—71 horses more than the Soul’s standard, naturally aspirated 1.6-liter and a solid 40 more ponies than the now mid-level 2.0-liter four-cylinder. The 1.6T’s power builds smoothly, and its 1500-rpm torque peak translates into ample midrange grunt. We dig the raspy fizz from the Turbo’s twin tailpipes, which sounds spunky yet won’t draw the attention of aggro dudes in slammed Honda Civics. (Although if they notice the Exclaim-specific red stripe around the lower body, it’s probably on. You’ve been warned.)

The Soul’s turbo engine is paired exclusively with a seven-speed dual-clutch automatic transmission, which does without racy launch-control programming or paddle shifters (manual gearchanges are possible via the console shifter). Despite those omissions and carrying 117 pounds more weight than the last 2.0-liter Soul we tested, our 3202-pound test car dashed to 60 mph a full 2.0 seconds quicker (6.5 seconds versus 8.5), and its 15.1-second quarter-mile pass at 93 mph was better by 1.6 seconds and 9 mph. For reference, in our last comparison test of subcompact crossovers, in which that 2.0-liter 2015 Soul finished second, the victorious Mazda CX-3 could manage only 8.1- and 16.3-second runs.

What’s missing from the Soul’s turbo equation is a manual gearbox, which Kia continues to restrict to the base car, despite offering it with the 1.6T in its Forte5 SX hatchback. The seven-speed automatic is generally well tuned at speed, yet its shifts can be lazy for a dual-clutch in the Soul’s Normal drive setting, resulting in some jerkiness around town and in stop-and-go traffic. We usually toggled the drive-mode button to Sport as soon as we started the car, as it removes some slack from the drivetrain by sharpening the throttle and transmission programming while still permitting the gearbox to use its top gear while cruising.

Despite the Soul being the only crossover in its competitive set not to offer all-wheel drive (although the company is working on a more conventional small crossover with that feature), the Kia offers similar amounts of interior space as its rivals, and it is downright cavernous next to the Mazda CX-3. More important, Kia has imbued the Soul with quite a bit of refinement over the years, including excellent visibility and ergonomics, tons of standard and optional equipment, and enough adjustability between the comfy front seats and the tilting and telescoping steering column to suit a wide range of drivers. Along with a leather-wrapped, flat-bottom steering wheel, additional features standard on the turbocharged Exclaim include proximity entry and keyless start, automatic headlights and climate control, dual-surface leather and cloth upholstery, and a 5.0-inch center touchscreen with Apple CarPlay and Android Auto connectivity.

Our loaded example also sported a huge panoramic sunroof ($1000) that effectively made for an all-glass ceiling. But it was the $3000 Technology package that really put a polish on our test car. Spring for that option and not only do you get an 8.0-inch touchscreen with navigation, blind-spot monitoring, and HID headlights, but also a premium Harman/Kardon audio system with speaker lights, LED fog and taillights, power-adjustable and heated front seats, heated outboard rear seats, a heated steering wheel, and power-folding exterior mirrors. Add $120 for carpeted floor mats and our as-tested total came to $27,815. That’s a significant sum for a small car, but it is one that’s very well equipped for the price. Plus, the added grunt under the Soul Turbo’s hood has a transformative effect on its fun factor, and none of its rivals can match its combination of speed, value, and practicality.