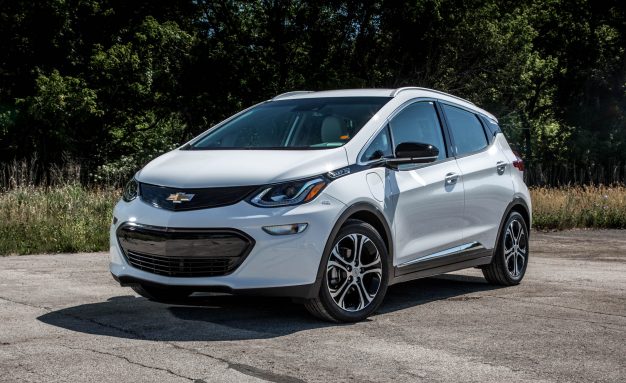 The company that’s had a free ride in the luxury electric car segment will face a worthy opponent when it puts its entry-level Model 3 on sale this year.

But until it does, if you’re looking for an electric car that can go over 200 miles per charge and costs less than $30,000, the Chevrolet Bolt is in a class by itself.

The Bolt’s exterior design is relatively conventional, save for a black or silver smirk where you’d normally find a grille. Behind it is a 200 hp electric motor driving the front wheels with nearly as much tire-twisting torque as the V6 in a Chevy Colorado pickup.

Driving the Bolt is as normal or next-gen as you want it to be. Stomp on the accelerator and it’s hot hatchback-quick, ready to chirp its eco-friendly tires and twerk the steering wheel with the best of them. Or the worst, if you’re not into torque steer.

The Bolt’s steering is pretty lively, almost too responsive, but it’s not really a sporty handler. It’s too heavy, and those tires don’t grip hard enough. The lane departure prevention system keeps you between the lines if you start to stray or get distracted by all those screens. Along with blind spot warning and automatic emergency brakes, that’s the extent of the autonomy offered in the Bolt, though Chevy is working one for Lyft that can entirely drive itself.

There’s a soft electric motor whine during acceleration, but it mutes when you reach cruising speed. That’s when the Bolt is smooth, gliding over bumps like a much larger vehicle, due to that extra ballast. It’s very quiet all around, which is one of the great advantages of electrics if you get it right, and Chevy did. Road and wind noise are well below average, and there wasn’t a squeak or rattle to break the silence in my car.

The first time I dialed up the points of interest on Apple Maps, I had a chuckle as the icon for gas stations popped up before it rebooted and switched to a plug. It was theatrical, but it drove the point home. Siri was very efficient at finding a charging station and leading the way to it.