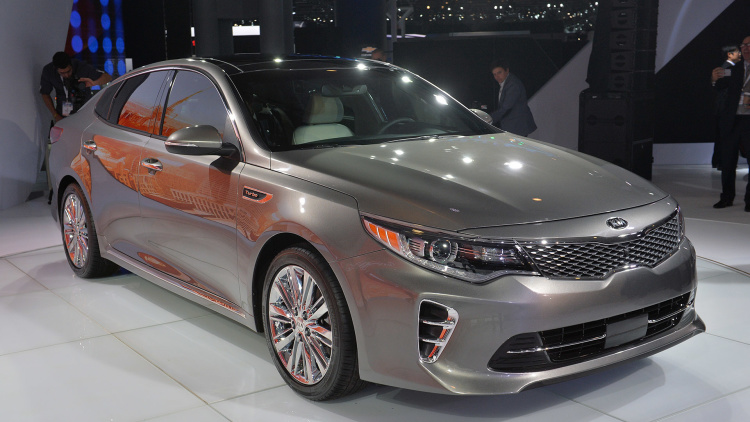 The attractive sheet metal is evolutionary, rather than revolutionary, building on the looks of the previous car, with Kia’s trademark grille treatment stretched wide, and better integrated with the headlights. Vertical foglight surrounds and an independent lower grille, meanwhile, make for a more aggressive fascia. LED taillights, an integrated diffuser and a pair of meaty oval exhausts are the highlights in back. Once again, the links to the current car are quite clear.

The new Optima should boast some improvements to the current car’s technology, as well. A six-speaker stereo is standard, although audiophiles will flock to the optional 14-speaker Infinity unit. Connectivity, being what it is, was also addressed, with Kia offering a new version of the company’s UVO infotainment system. Running on an eight-inch touchscreen, the Optima’s latest infotainment system integrates neatly with both Android Lollipop and iOS 8.

Under hood, Kia will continue to offer a standard, naturally aspirated 2.4-liter four-cylinder, as well as an optional 2.0-liter, turbocharged four-cylinder. Power for both engines is estimated to be down compared to the current car, with the 2.4 dropping from 192 horsepower and 181 pound-feet of torque to 185 hp and 178 lb-ft, and the 2.0T losing 27 of its 274 hp and nine of its 269 lb-ft. Kia is claiming that both engines have been retuned for fuel economy, although it wasn’t able to provide any figures to back up that argument.

On top of the 2.4 and 2.0T, Kia will also offer a 1.6-liter, turbocharged four-cylinder, complete with the company’s first seven-speed dual-clutch transmission (the previous two engines are mated to six-speed autoboxes). The 1.6, which Hyundai/Kia fans will know from the Veloster Turbo and Forte range, produces 178 hp in the Optima, which is paired with 195 lb-ft of torque.

Have a look at the images of the all-new Optima, and then scroll below for the official press release.