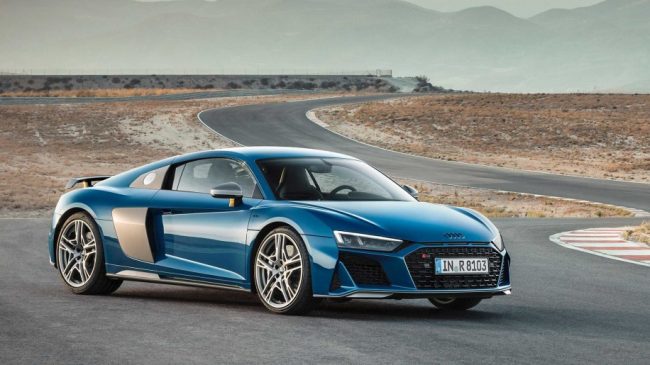 Audi has revealed the next evolution of the R8 coupe and Spyder, the road version taking a ton of cues and parts from the R8 LMS GT3 race car revealed at the Paris Motor Show, as well as the R8 LMS GT4 racer. The carmaker said 50 percent of the parts are shared with the GT3 challenger, 60 percent of parts with the GT4. The tangible result is a car with sharper looks and reflexes, a wider range of driving dynamics, shorter braking distances, and more power.

The outside gets busier, starting with a wider grille and its honeycomb-effect mesh. Three slats above the grille are meant to recall the original Quattro. A more pronounced front splitter underlines proceedings, while the side intakes are split into two distinct areas by vertical fins. Creased fenders arc over the front wheels, prominent side sills span the flanks. In back, a mesh grille spans the entire rear fascia, above a deeper diffuser and two enormous oval tailpipes set into recessed pockets at the corners.

Three new exterior packages bestow different highlights around the bodywork hem, and new colors include Ascari Blue and Kemora Gray. The three-piece engine cover can be had in plastic or carbon fiber. Nineteen-inch wheels come standard, and milled ultralight 20-inchers on new Michelin summer and sport rubber are optional. The interior makes do with a few extra applications of Alcantara.

Audi says Dry, Wet, and Snow driving modes have been added to the Dynamic Select “depending on engine,” which we’ll take to mean as a benefit for the Performance trim. Retuned steering dynamics on both the electromechanical and dynamic steering setups improve feedback and response, the revised ESC programming shortens braking distances by anywhere from five feet to 16.4 feet. An optional front stabilizer fashioned from carbon fiber reinforced plastic and aluminum shaves more than four pounds.

There will still be two outputs for the 5.2-liter, naturally aspirated V10, but the trim names change. Right now we have the R8 V10 and R8 V10 Plus, but the top model becomes the R8 V10 Performance. Audi didn’t confess the new power ratings, but Autocar said the new figures are 562 horsepower and 406 pound-feet of torque in the base model, representing 30 additional horses and eight more pound-feet. The new figures shave 0.3 seconds off the 0-60 sprint. The Performance version gets mome more ponies, for 611 hp, and four more pound-feet, for 417. The boosts are said to come in part from ECU tweaks and a new titanium valvetrain. The gains counteract roughly 44 pounds of new WLTP emissions equipment like a gas particulate filter.

An LA Auto Show reveal wouldn’t be surprising. Expect to see the updated R8 in dealerships in Europe early next year, with U.S. deliveries sometime after that, presumably as a 2020 model.

Previous post Aston Martin's Project 003 Could Have A Name: Valhalla