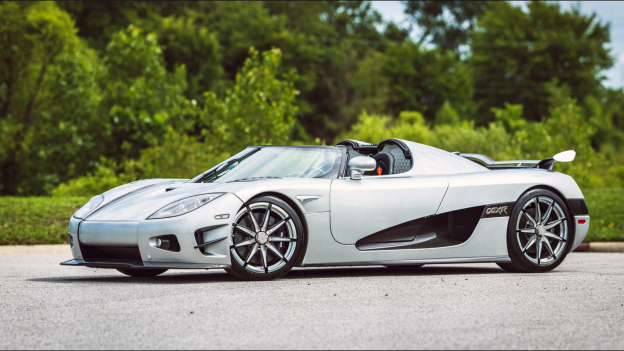 Although he might be controversial inside and outside the boxing ring, we can simply appreciate Floyd Mayweather for his impressive collection of automobiles. Known for his taste for flashy hypercars, Mayweather may show off his garage full of seven-figure exotic cars at any opportunity, but he also really likes to rotate out “old” cars and drop millions of dollars on the newest crazy vehicles on the market. His latest purchase includes a pair of Ferrari LaFerraris, meaning he’ll soon have to make some room in his massive driveway. Rumors have been circling the web since March that Mayweather would be selling his Koenigsegg CCXR Trevita—and now, prestigious auction site Mecum has confirmed it with a listing on Friday.

This Koenigsegg CCXR Trevita is one of only two Koenigseggs made with Koenigsegg’s Diamond Weave exterior finish, and the only example in the United States. You get a lot for the original $4.8 million MSRP, including a 4.8-liter, twin-supercharged V-8 pushing 1,018 horsepower that rockets the CCXR Trevita to over 250 mph. The car bristles with Koenigsegg’s most refined technology, including the Xtrac Super Synchro paddle-shift transmission engineered specifically for the CCXR. The Trevita has the honor of being a part of the Ash Crest Collection, a collection of the best and rarest sports cars on the planet.

According to Mecum, Mayweather’s Koenigsegg will be the main attraction at this year’s Pebble Beach Auction in Monterey. This 2010 CCXR Trevita only has 1,947 miles on it, and should definitely fetch much more than the $4.8 million it could be had for seven years ago, probably especially considering the previous high-profile owner.