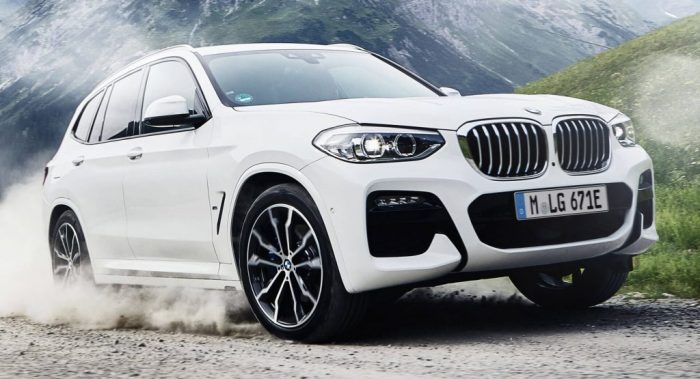 BMW showcased a revamped electrified lineup at this year’s Geneva Motor Show, from the 225xe Active Tourer to the 745Le xDrive. Among the haul, the BMW X3 xDrive30e plug-in hybrid went into production this month and comes to the U.S. next year, perhaps as a 2021 model. Slotting into the lineup between the gas-powered X3 xDrive30i and topflight M40i, the PHEV powertrain pairs a turbocharged 2.0-liter four-cylinder making 181 horsepower with a 107-hp electric motor and a 12-kWh lithium-ion battery located under the rear seat. CarsDirect spied an early order guide for the hybrid that put the starting price at $49,545 after a $995 destination charge.

That puts the PHEV $4,600 above the non-hybrid 30i, and $6,350 below the M40i. In terms of specs, the non-hybrid 30i makes 248 hp and 258 pound-feet of torque; combined system output for the 30e hybrid is 252 hp and 310 lb-ft, able to be temporarily upped to 293 hp with a press of the XtraBoost button. The 30i gets from 0 to 60 miles per hour in six seconds, the heavier 30e needs about 6.3 seconds. Gas mileage will be the PHEV’s selling point, and we await EPA figures. BMW expects electric-only range to settle around 20 miles in the U.S., compared to 31 miles in Europe on their WLTP cycle. Of note, that electric driving also takes advantage of the X3’s all-wheel-drive system.

The BMW starts at a lower MSRP than competition like the 2020 Volvo XC60 T8 eAWD PHEV costing $54,945 and 2019 Mercedes-Benz GLC 350e 4Matic that costs $51,645. The Volvo’s combined system numbers are 400 hp and 472 lb-ft, but distinctions like the Volvo’s rear-axle e-motor making the crossover 2WD in an EV mode offering 17 miles of range could make a difference to buyers.