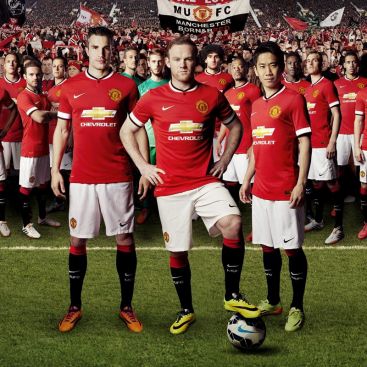 Chevrolet and Manchester United fans worldwide today are celebrating Chevrolet’s debut on the football club’s 2014-15 season shirt. Fans are invited to upload photos of themselves wearing a digital version of the new shirt at www.chevroletfc.com, and share it via their social channels.

Putting fans at the center of the brand’s debut on the shirt via a unique digital experience is part of Chevrolet’s “What Do You #PlayFor?” global campaign to bring football fans closer to the sport and help them celebrate the passion for play.

“Manchester United has more than 659 million supporters around the world, and we want them to know that we march side by side with them,” said Tim Mahoney, chief marketing officer, Global Chevrolet. “We wanted to celebrate this new shirt with Manchester United supporters in an historic way because they deserve to be part of this important moment in club history.”

The video, which features Manchester United fans throughout history marching through the streets of Manchester with current players and legends singing the “Glory, Glory Man Utd” anthem, ends with player Wayne Rooney declaring, “This shirt belongs to you; always has, always will,” as he and teammates Robin van Persie, David De Gea, Adnan Januzaj and Juan Mata reveal the new Chevrolet-branded home shirt.

“The Club’s traditions and heritage are extremely important to our players, team management and 659 million followers worldwide. As we look to our future in the new shirts, we are delighted that Chevrolet has been so committed to honouring everything that is so important to our club.”

Celebrating its debut on the new shirt is one of several upcoming events highlighting Chevrolet’s partnership with Manchester United. On July 23, Manchester United will play its first match in the new Chevrolet-branded shirt against the L.A. Galaxy at the Rose Bowl in Pasadena, Calif., in the Chevrolet Cup.  Chevrolet also will serve as the presenting sponsor of Manchester United’s Aug. 2 match versus Real Madrid at Michigan Stadium in Ann Arbor, Mich.  Chevrolet has plans for a memorable fan moment at Manchester United’s 2014-15 opening Premier League match on the weekend of Aug. 16-17 against Swansea City FC.