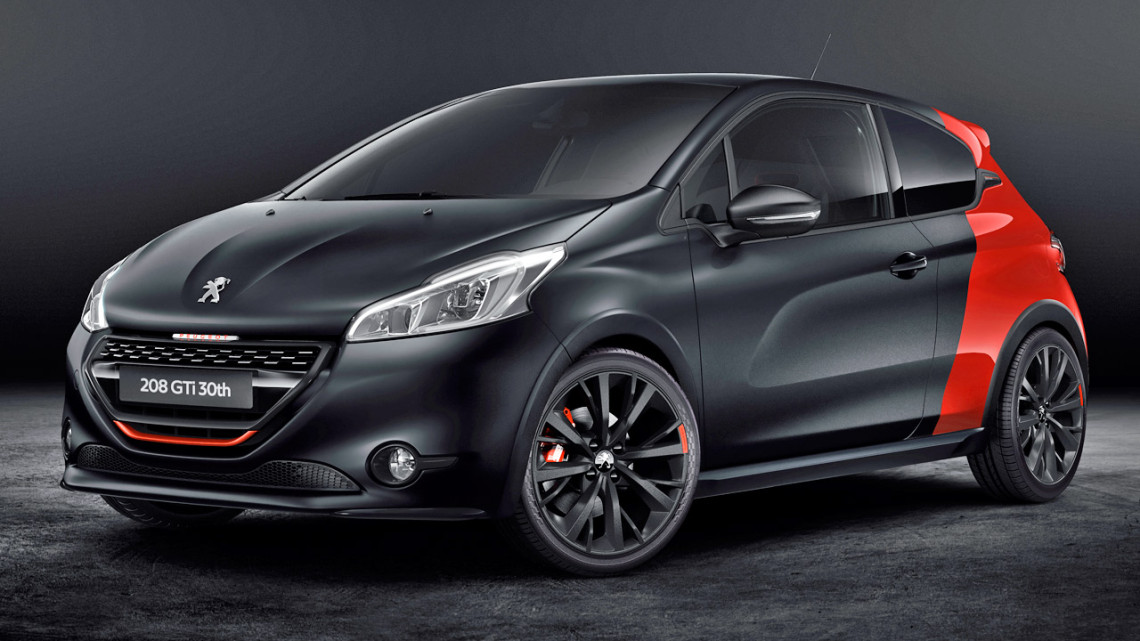 30 years after the 205 GTi, PEUGEOT reinterprets the legend in a more radical version of the 208 GTi.

The 208 GTi 30th delivers more intense driving sensations with its new Euro 6 1.6-litre THP petrol engine developing 208 hp and torque increased to 300 Nm. It is mated to a six-speed manual gearbox, with exceptional traction and efficiency assured through the specification of a Torsen differential and specific suspension and steering settings.Its sporty and assertive temperament can also been seen in its stance and look, in particularly by its two-material livery, separated by a sharp dividing line.

It will be presented to the public at the forthcoming 2014 Paris Motor Show, with sales starting in November 2014.

On 13 March, less than a year after its sales launch, the 10,000th PEUGEOT 208 GTi came off the production line, confirming the success of the reinterpretation of the GTi legend and PEUGEOT’s top of the range sports strategy in the B Segment.

PEUGEOT has left its mark on the history of motorsport; this DNA can be found in the genes of the 208 GTi, as with the RCZ, and its R version, pumped-up by PEUGEOT Sport. As Peugeot celebrates 30 years since the original 205 GTi, it is now the turn for the 208 GTi to pass through the expert hands of PEUGEOT Sport, to give it a more radical character with what some call ‘extra soul’, in response to expectations from enthusiasts wanting a sportier and more passionate experience.

A coherent exclusive signature with a more radical temperament

From the outset, the exclusive and more radical temperament shines through with the 208 GTi 30th. The suspension is lowered by 10mm, the track widened by 22mm at the front and 16mm at the rear, its larger wheels stand out, giving it a well planted stance on the road, clearly indicating its sporty intent.

The chic bright chrome finishers on the 208 GTi are replaced by matt black on the 208 GTi 30th, giving it a more brutish look. At the front the same treatment is applied to the grille surround, the foglamp bezels and door mirror shells

From the side, the lowered stance is accentuated by matt black side skirts and wheel arch extensions that cover new 18″ wheels finished with matt black rims. The front wheels house large red PEUGEOT Sport labelled brake calipers. The window weather strip, which finishes with a signature paying homage to the illustrious 205 GTi, is also finished in matt black, while the quarter panel bears a “208 GTi 30th” logo.

At the rear, the rounded twin chrome tail pipes ensure the sound of the new engine is fully expressed to enhance the aural driving experience.

Finally, the 208 GTi 30th could only be finished in colours that identify this sporting world. The interpretation uniting the red and black in a two-tone and two-material treatment is innovative and unique. The front is finished in a textured black, contrasting with the new lacquered red at the rear. The two colours are divided by a sharp oblique straight-cut line, as first seen on the Onyx Supercar Concept and reinterpreted on the 308 R and Exalt Concept cars. The 208 GTi 30thwill also be available in top of the range Pearl White and Ruby Red, historical colours of GTi cars.
Perfectly consistent with its exterior signature and dynamic character, the interior ambience declares the more radical sporty character developed for the 208 GTi 30th. The red fading to black finishers on the 208 GTi change to lacquered black. The black door handles with a red line echo the seat belts. High-quality floor mats are trimmed in red, while the front bucket seats are of a form specially developed by PEUGEOT Sport. These seats are trimmed in a exclusive blend of materials, mainly Alcantara, accompanied by black TEP with red stitching and a black dotted mesh pattern with red highlights.

Unrestrained driving sensations from incisive behaviour on the road

The sensations begin when taking the wheel of the 208 GTi 30th. For the driver, familiarisation is simple and obvious as is directing the car. The compact steering wheel makes it easy to place the vehicle and enhances driving sensations. The instruments, located high up, are directly in view. This facilitates the reading of information, which becomes instantaneous, without the driver having to take their eyes off the road.

Consistent with its specific dynamic character and pronounced driving sensations, this driving position is ideally complemented by a specific bucket seat developed by PEUGEOT Sport. Together with the small wheel, the head-up instruments and feedback from the specific steering and suspension, it allows the driver to be at one with their car.

The new 1.6 THP engine, meeting the Euro 6 emissions standard, is fitted with Stop & Start. Its maximum torque is increased to 300 Nm and maximum power to 208 hp, an immediate reference to the model name.

The power and torque are transmitted to the wheels via a 6-speed manual gearbox with specific gear ratios, and a Torsen limited slip differential – both taken from the RCZ R, allowing the full potential of the vehicle to be exploited.

The ESP and traction control are recalibrated, so as to be less intrusive when driving and to set free the vehicle’s traction and allow the Torsen to operate.

The advantage provided by the Torsen and the reduced anti-roll at the front are felt in particular when accelerating in a corner by maintaining tight trajectories, and when braking, by improving stability.

The steering calibration has also been the subject of much development work, both on a circuit and on the road. The objective was to obtain a linear level of assistance appropriate for the character of the car, taking account of the effect produced by the Torsen.

Associated with new damper settings and spring rates, as well as revised anti-roll, the steering is informative. All together it offers both precision and agility.

The 208 GTi 30th can count on a braking system to match the performance achieved, with 323mm diameter and 28mm thick discs at the front and Brembo fixed four-piston calipers.

Its performance and sharper handling are achieved with efficiency that is unprecedented in the segment, with CO2 emissions of just 125g/km.

The 208 GTi 30th again demonstrates that emotion, sportiness and efficiency are engrained in PEUGEOT’s heritage and genes.