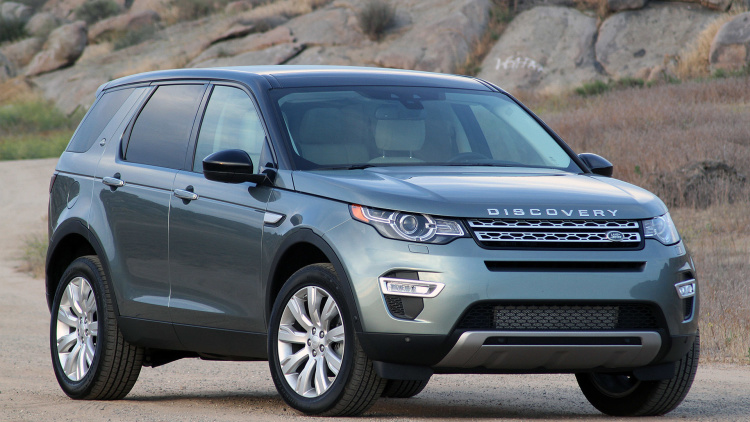 The letters LR are two-thirds of the acronym JLR, but Land Rover sales comprise 80 percent of Jaguar-Land Rover’s US numbers this year. Of the 40,148 JLR vehicles sold through the end of June, 32,312 have been Land Rovers. That’s part of the bottom-line sense behind the marque’s decision to produce “leisure vehicles” that will form a new Discovery range. Boosting the profit engine and taking advantage of the crossover craze by expanding on core strengths? The question isn’t “if,” but “how?”

The Discovery Sport is the first answer. Land Rover made a positive impression with the handsome Discovery Vision Concept that presaged the Discovery Sport, and it has maintained enough of that character in the translation to production. The flat-sided, ominous bearing of the concept gives way to a curved, elegant shape on the retail model accented with touches of ornate jewelry, like the layered headlights and textured taillights. It is good-looking from every angle.Luxury perceptions and touchpoints continue inside. This is the nicest Land Rover we’ve ever been in – the two-tone interior is a pleasure to the eye. Thick, stitched leather gives the impression of boutique hide shops. The steering wheel is a natural fit for our hands. Even the plastic atop the instrument panel is well done. The seats are welcoming, the back bench leaves plenty of room for taller types, and the cabin is awash in light from the glass roof. Plus, there are USB and 12-volt plugs all over, you can pair two phones via Bluetooth, and the vehicle provides a WiFi hotspot. If we were going to request a Range Rover Evoque for the Land Rover set, this would be it.

It shouldn’t surprise you to know that you’ll pay for that appeal, though. Our tester had $14,055 in options, a number that equates to 37 percent of the $38,065 base price (including $995 for destination). Most of that comes from the $8,500 HSE Luxury Package that bestows baubles like the panoramic roof, 10-way power seats with Windsor leather, the 19-inch alloy wheels, power tailgate, fog lights, and xenon headlights with signature lighting, among others. The toothsome ivory headliner isn’t included in that, however; it’s another $275.The excellent vibrations continue on the move because the Discovery Sport is suave at speed. Engine isolation is excellent – you can barely hear it. There’s a touch of whoosh from wind noise around the A-pillars and mirrors, heard only because the NVH is otherwise terrifically muted through details like the acoustically laminated windshield and aerodynamic elements. For any who wonder how 240 horsepower and 251 pound-feet of torque will propel a 3,957-pound crossover, the answer is, in this application, gracefully.

Note, however, that our observations concern traveling at speed. The tuning of the ZF nine-speed transmission makes any other kind of motoring a nuisance, which is a terrible comedown in such a graceful package. The most pressing problem is that the automatic gearbox hates to downshift. You’ve got to stomp on the throttle and hold the pedal down before the transmission will switch gears, leading to one of two unwanted scenarios when you want to pass someone. By the time the gearbox downshifts your opportunity will have passed before you could. Further, when it finally does grab a lower gear, the revs will bounce so high that the whole vehicle is thrown forward, sending your right foot onto the brake as forcefully as it was just applied to the accelerator.The transmission hunts through gears at low speeds as if it’s determined to use all of its gears just because it has them. We rotated the gear knob to Sport and tooled up our favorite canyon road, hoping that dedicated setting would lessen the cog chasing, but that wasn’t the case. We were almost never in the right gear coming out of a corner; the transmission waited for throttle input after the corner to figure out which gear it needed, then sample a few, then pick one. During this exercise we learned that the seat bolsters weren’t solid enough to keep our legs in place, a moot point since we never had any desire to try sporty driving again. Our findings echo those we suspected on our First Drive.

After a week with it our left-handed compliment is that it’s bland and vanilla, but it’s some of the best vanilla you can buy, even with that exasperating transmission. Its treatment of the basics is superb, and we doubt its intended audience will bring our reviewer’s sensitivities to the gearbox foibles. Our biggest reservation about it is sentimental: as old and literally square as the proper LR4/Discovery is, we really like it. Twenty years from now that LR4 will still express a certain kind of esoteric English cool, and we could get in one today and drive to Buenos Aires after a few hours of prep. As our First Drive in Iceland showed, the Discovery Sport can do the family proud on the roads less traveled. Still, if it’s going to use that name and, as the brand informs us, “[set] the tone for the new generation of Land Rover Discovery premium SUVs,” we wish it had more Discovery in it, and more sport.

Next post Chevrolet Planning New Crossover Between Equinox And Traverse