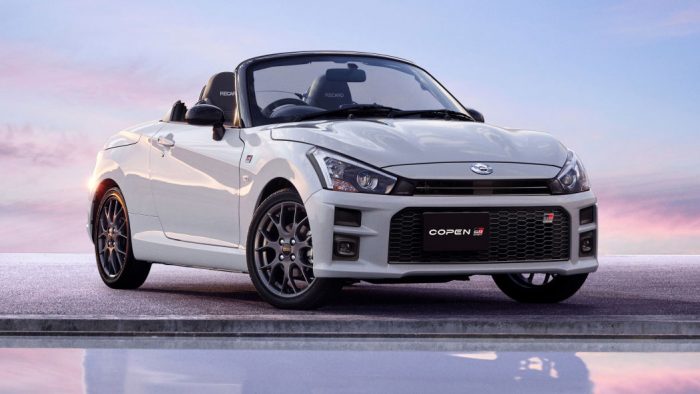 In its home market, Toyota has a designated sport brand called GR, which is meant to invoke Toyota’s Gazoo Racing division. It has three tiers of sportiness: the entry-level GR Sport, GR, and all-out range-topping GRMN. Ahead of the Tokyo Motor Show, Toyota announced it is adding to its GR Sport lineup a new mini convertible called the Copen GR Sport.

Toyota pulled the Copen from Daihatsu’s bank of cool minicars. Diahatsu announced its own Copen GR Sport at the Tokyo Auto Salon in early 2019. Now Toyota will sell its own hotted-up version of the tiny roadster. Toyota Gazoo Racing tweaked the new model and gave it sportier equipment and a visual update inside and out.

First, let’s talk basic stats. The Copen GR Sport weighs roughly 2,000 pounds and has a 0.66-liter turbocharged engine that makes 63 horsepower at 6,400 rpm and 68 lb-ft of torque at 3,200 rpm. It’s front-wheel drive and is available with a five-speed manual or a continuously variable transmission (CVT) with seven-speed Super Active Shift and paddle shifters.

Toyota made the Copen a bit more visually aggressive as well. It has a unique front bumper with side air intakes, a larger front grille, and a rear bumper with a new diffuser look. It also comes with matte gray BBS forged-aluminum wheels, LED headlights, LED fog lights, and LED taillights. GR Sport emblems on the front, side, and rear assure passers-by this is not a regular Copen. In total, eight exterior colors are available, as are multiple color options for the roof.

The black interior was spruced up with Recaro sport seats with GR embroidery, a MOMO leather-wrapped steering wheel with the GR emblem, piano black accents, and a new GR instrument cluster with red accents.