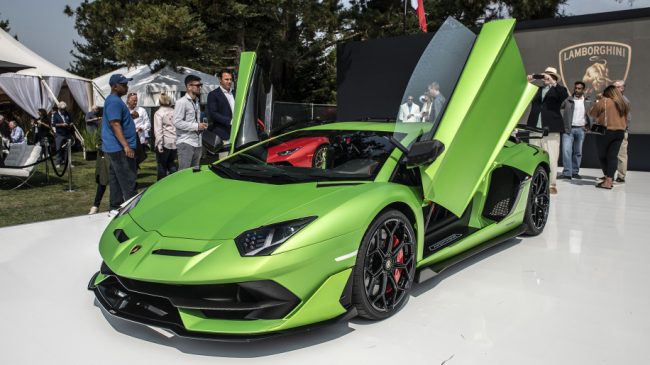 Lamborghini officially pulled the covers off a special version of the brand’s Aventador flagship this evening, and it wears a cryptic SVJ 63 designation. The name comes from the year 1963, which is when Lamborghini was founded. Only 63 will be built, and with the amount of carbon fiber and extroverted graphics covering them, they’ll definitely stand out from the crowd.

Power for the Aventador SVJ comes from a V12 engine producing 770 hp at 8,500 rpm and 530 pound-feet of torque at 6,750 rpm. That’s enough power to push the Aventador Superveloce Jota from 0 to 62 miles per hour in just 2.8 seconds and to a top speed of over 217 mph. But its true claim to fame is its performance on the track. The SVJ currently holds the production vehicle lap record at the Nürburgring, lapping the famous circuit in 6:44.97.

Aerodinamica Lamborghini Attiva 2.0 debuts on the Aventador SVJ. Similar to the system in the Huracan Performante, electronic actuators open or close flaps in the front splitter and on the engine cover. Combined with Lamborghini Dinamica Veicolo Attiva 2.0, the SVJ’s electronic brain can adjust been zero and maximum downforce in less than 500 milliseconds. Air over the car’s rear wing can be split left and right, allowing for downforce to be applied only on the wheel that needs it.

Total production of the Aventador SVJ — including the even more exclusive 63 — will be limited to 900 units. Deliveries are slated to begin in the first part of 2019 at a starting price of $517,770.00.