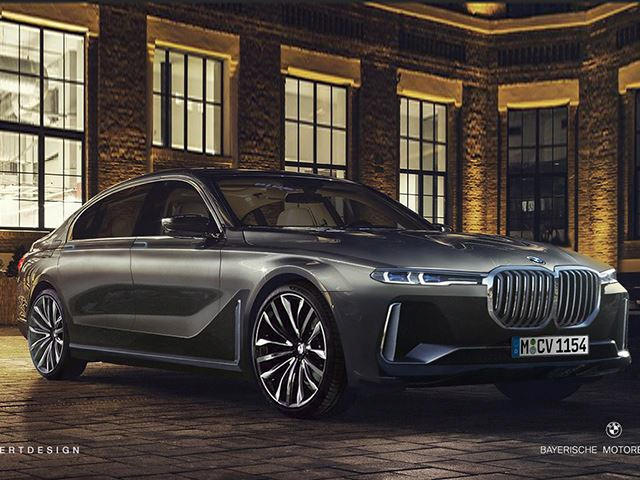 Photos of the 2020 BMW 7 Series have leaked on Twitter, but we can’t really tell you what the rest of the car looks like, because all we can see is that grille.

In an era when the rise of EVs is making grilles functionally unnecessary, some automakers are delivering front-end designs such as the Tesla Model 3 and Infiniti QX Inspiration concept that remind us of bank robbers wearing pantyhose over their faces. Some automakers, like Toyota/Lexus and BMW, are headed in the other direction, pasting on grilles that demand attention.

This, BMW’s latest, is in keeping with the big grille on its mate, the X7 SUV. Meanwhile, the BMW Vision iNext is at least one EV with a grille that’s also mighty hard to miss. (We learned a little more about the iNext’s gadgetry this week at CES.)

Colleagues like our John Beltz Snyder who have seen the iNext in person say the grille works far better than photos would indicate. Let’s assume that’ll be the case with the 7 Series, too. Actually, the three-quarter view in the gallery above is not nearly as jarring as head-on. And the backside looks pretty good.

Things could be far worse. For a little perspective, don’t forget the Chris Bangle-era 7 Series, aka the Bangle Butt, which has been often panned but also often copied since it debuted way back in 2002.

We’ve reached out to BMW for more information on this refreshed 7 Series’ official debut. Stay tuned.