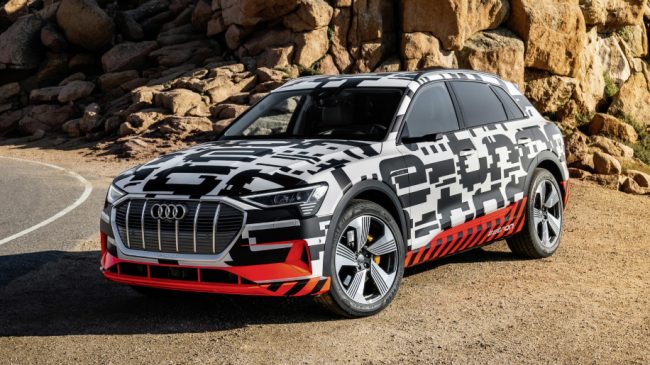 Though Audi has been parading 2019 Audi E-Tron electric crossover SUVs since the Geneva Motor Show earlier this year, it’s been pretty stingy about details, releasing a few tidbits every few months. Some of the most interesting of those morsels just came out: horsepower and torque. The Audi’s dual motors, one in front and one in the rear, are officially rated at a total of 355 horsepower and 414 pound-feet of torque.

Those numbers are only part of the story, because the E-Tron’s power output is a bit complicated. The 355 horsepower and 414 pound-feet of torque are the main rating, and the motors are capable of producing those numbers for 60 seconds of sustained acceleration. Going beyond that point will result in reduced power. While that sounds limiting, remember that you’ll rarely be foot to the floor for that amount of time, and would likely hit the crossover’s electronically-limited top speed of 124.3 mph well before the full 60 seconds elapsed.

Another part of the story is that the E-Tron can actually produce even more than that primary power rating. There’s a high-power mode activated when shifting from drive to sport, and then fully depressing the throttle pedal. In this mode, power jumps to 402 horsepower and 490 pound-feet of torque for 8 seconds. That will likely be more than enough in most situations, since the mode also allows the Audi to hit 62 mph in under 6 seconds.

Now that these numbers are out, we can see more clearly the area of the market the E-Tron will compete in, and it seems to be the same one as the Jaguar I-Pace and Tesla Model X 75D. The Jaguar boasts the highest primary power ratings of 394 horsepower and 512 pound-feet of torque, though the Audi’s boost mode is close. Both crossovers are also more powerful than the entry-level Tesla Model X 75D crossover. The E-Tron’s range is very close to the Jaguar as well. The Jaguar I-Pace has a range estimate of 240 miles, and the Audi is slightly higher at 248 miles. The aforementioned Tesla falls behind both of them at 237 miles. The Audi’s range is measured on a different test loop than the EPA’s though, so it could change for the U.S.

Pricing and design will likely be the biggest differentiators in this electric crossover class. The Audi is shaping up to be the most conventional looking and functioning crossover of the three compared with the swoopy Jaguar and winged Model X. The Jaguar is currently the cheapest of the group at a little over $70,000, and the Tesla is the most expensive at just under $80k for the 75D. Audi’s CEO has previously said the price will be between that of the Jaguar and the Tesla. We likely won’t have to wait long for the official price, though, since Audi will start accepting orders for the E-Tron on September 17, 2018, with deliveries coming early next year.