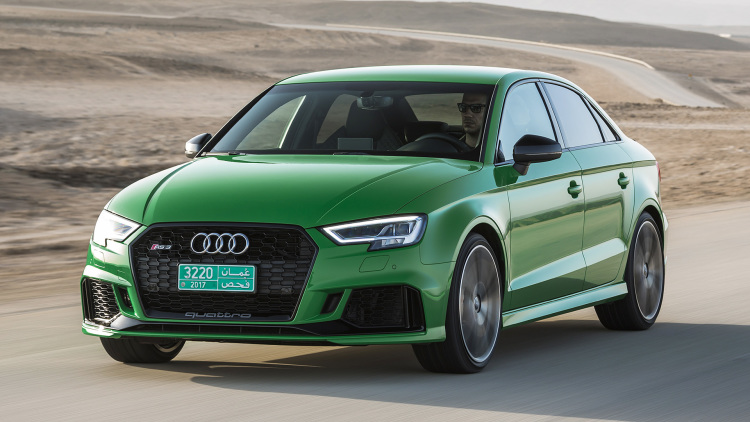 Audi’s Quattro division never let us have the giant-killing, all-wheel-drive RS3. Too sophisticated for the US, they said. Too European. And we only make it as a Sportback (that’s hatchback to you). You wouldn’t like it. You’re more SUV kind of people.

Others, those in Quattro’s special we-like-you countries, bought the RS3 and constantly raved about it, insisting its handling made the Mercedes-AMG A45 look ponderous (because, well, it is), its packaging was terrific, and the noise, they said. The noise. Over and over, the noise.

But ex-Lamborghini president Stephan Winkelmann is now the boss and he’s brought with him a worldview that Quattro GmbH never had. And despite being busy changing the letterhead to Audi Sport, Winkelmann found time to think about America. And he must like us because he’s moved us to the top of the list. Not only will we get the face-lifted RS3, with its new, lightweight five-cylinder turbo motor crunching out 332 pound-feet of torque and 400 horsepower, we’ll get it in a crisply styled three-box sedan. And we’ll get it first, before even Germany (where it’s built).

The RS3’s 2.5-liter five-cylinder has enough power to hurl it to 62 mph in 4.1 seconds and, thanks to launch control, the ability to do so repeatably. It’s coming with a 155-mph top speed that can be raised to 174. It’s coming with limpet grip from a rear-biased all-wheel-drive system. It’s coming with a seven-speed dual-clutch transmission (and don’t ask for a stick shift, because they haven’t bothered to engineer one). It’s coming standard (for the US) with constantly variable magnetic ride dampers, which replace the base fixed-rate steel spring-and-damper setup.

The old engine used an iron block, but our first RS3 uses the new aluminum one, and instead of ripping out 335 hp like that one (or 355 as in the TT RS Plus), we get 400 hp. Only the bore and stroke dimensions remain in an engine that refuses to share a single bolt with the one it replaces.

It has the indecency to also be more frugal, and it’s lighter, too, shedding 57 pounds where it counts – over the front axle. No carmaker has had more experience with trying to entice handling finesse out of nose-heavy fast cars, so it saved some weight with aluminum, another 40 pounds by using a magnesium oil pan, and another couple by hollow-boring the crankshaft.

With both direct and indirect fuel injection, variable valve timing and lift, and a turbo that can stuff in up to 1.35 bar of air, it’s also immensely strong, almost all the time. It has you covered if you want to mess around from low revs, reaching peak torque at 1750 rpm and still punching it out at 5850. Not coincidentally, 5850 rpm is the exact spot in the rev range where it also hits peak power, which it’s still delivering at 7000 rpm.

There’s the seven-speed dual-clutch transmission further along the powertrain, and then it gets to the hang-on rear differential, which can swallow up to 1,475 lb-ft of torque and that all now runs a simple-to-use launch control system.

Audi can’t tell us how much default torque it sends to the rear axle, because that’s a constantly moving target, but the engineers tried to make it rear-biased to offset the 58:42 front-to-rear weight distribution.
That’s helped by a magnificently clean, crisp, and sharp interior, dominated by the 12.3-inch Virtual Cockpit multimedia screen-cum-speedo, complete with a new RS mode to collate and show off your pedaling prowess.

The unique front seats have manual adjustment to save weight and height. They’re diamond quilted with contrast stitching and are enthusiastically bolstered and tremendously grippy in the most trying of circumstances. All of this and it’s a five-seat sedan with decent luggage capacity.

Audi can’t tell us how much it will cost yet, except to confirm it will probably be about $60,000, plus or minus $5,000 (final pricing will depend on the equipment list, which is also far from locked in), with a choice of two distinct 19-inch alloys. The top-of-the-line S3 sedan lists at $43,850 plus options, if that helps you to figure where the RS3 sits. And it’s by far the cheapest car Winkelmann has ever launched as a CEO.

Audi Sport will still build the RS3 in hatch form (but not for us), which will join the sedan in European showrooms in August or September. Our first RS3 will be here before that, earlier in summer. For once, the US gets something cool before everyone else.