As I roll up to LAX departures to drop off a colleague, I can’t help but notice the bystanders’ lingering gazes one would associate with West Coast celebrity culture—a break from the impatient lethargy of weary 21st-century travelers awaiting their much-delayed Uber Priuses. 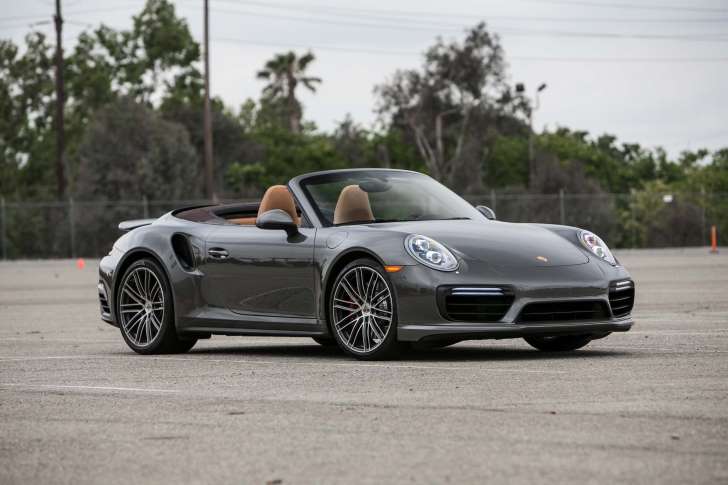 But in this era of polarized political—and socio-economic—climes, the glances now feel less about curiosity and more like suspicion. Oligarch money launderer? Hedge funderkind? MTV reality-show bro? A few years ago, my curbside launch might have occasioned a subtle extra woof of throttle in car camaraderie. Now, I skulk away cautiously. It’s a different time.

How to best put power to the pavement? Our assistant road test editor, Erick Ayapana, has some tips: “PSM off, drive mode in Sport Plus. Hard on the brake, apply throttle, wait for engine to max out at about 5,000 rpm, release the gas, and keep looking forward!”

Ayapana tried a trick Porsche suggested. It involved switching the drive mode from Sport Plus to Sport immediately after launch—which retracts the front and rear spoiler to reduce drag. This resulted in a 1-mph increase in trap speed. It’s the little differences, right?

As for stopping all this momentum, the 911 carries forth Porsche’s tradition of excellent binders—six-piston front calipers with 380-by-34mm rotors and four-piston rear calipers with 380-by-30mm rotors. It goes without saying (but Walton is going to say it anyway) that the brakes were tremendous and trustworthy throughout, with precise and easy-to-learn modulation. Or as Ayapana puts it to his fellow millennials: “Scrubs triple-digit speeds like it ain’t no thang.” In precise terms, it drops anchor from 60 mph to 0 in 97 feet. As a result, the Turbo Cab’s 01000-mph time comes in at a scorching 10.7 seconds.

The seats themselves are buckboard firm, so be sure to position them correctly, lest you feel soreness from improperly aligned pressure points as you creakily extricate from the car. Just remember, how you emerge from a Porsche 911 Turbo Cabriolet is as important as how you drive it. The public will be watching.