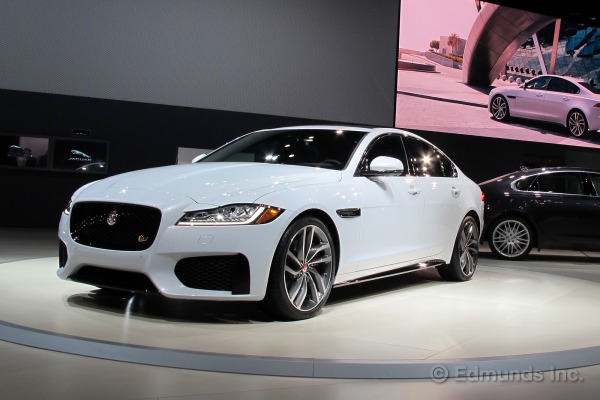 Jaguar has never had a problem with style or driving joy. Every generation of the British brand’s vehicles – with excuses made and accepted in advance for S-Type and X-Type and other outliers – has offered compelling styling and great performance. New kid XF was no exception when it was introduced in 2007. The car’s sheetmetal pointed the way forward for the fully up-to-date range we see now, and its confident engines and handling chops were on pace with the best Bimmers, Benzes, and Cadillacs.

The first-generation XF made some hay for Jaguar, selling around 280,000 copies through 2014. But those annualized rates still represented a blip on the luxury midsize radar when viewed against the backdrop of the German Three’s numbers. Part of that sales story has been down to the E-Classes and 5 Series of the world being consistently excellent, to be sure. But a lot of the blame can be found in Jaguar’s historic weak spots. Grace and pace the brand had in spades, but consumer perception of quality and reliability just weren’t there, pricing was typically near the top of the class, and the residual values of the cars were low (a combination of all three factors, most likely).

Of course, Jag would love to sell a few more cars. But this time, instead of simply building a great-looking, great-driving new XF (which is absolutely the case), the brand is doing some clever non-engineering-based things to put more big cats in more garages than ever before.

After flying all they way to Spain – Pamplona and the Navarra Circuit, by way of Barcelona and a Range Rover adventure you’ll hear about soon – I would be remiss not to tell you how the new XF goes down the road. Some 150 kilometers (93 miles) of motorway and challenging b-roads lie between the city with that annual livestock problem and the 2.44-mile, FIA approved racecourse. A route that led me to understand that this XF, in my case the 380-horsepower XF S, has gained more than it has lost in the generational changeover.

The company is fully committed to aluminum for its midsizer, with the new car now using a body structure that’s 75-percent built from the stuff. I’m told that means a body in white that weighs just over 600 pounds, and an overall weight savings of 11 percent. Body stiffness has been raised by 28 percent in the process. Those numbers seem impressive to me, but the proof of their worth was truly evident when stringing together Spanish corners on a climbing mountain road. The rigid body combines with quick, weighty steering to offer rapid changes of direction, and it’s soon clear that car has more ability than public roads and my fear of international prisons can surpass. Plus, I know there’s track time later in the day.

The XF uses a traditional double wishbone front suspension, with an integral link rear, as well as adaptive dampers. That setup is partly responsible for the keen turn-in I felt, but even in the sporting modes there’s a bit of softness in the dampers. I really have push before I feel any of that squish in the underpinnings, and, honestly, the tradeoff of very good ride quality is worth the minute amount of roll.

Said ride quality is appreciated in this nicely done Jaguar cabin, too. There are more evocative colors and textures available than you see in the car I drove and photographed, but even in this staid palate I found the design well executed and the materials good to touch. I’m still not a fan of that rotary shift knob, but even I have to admit that its presentation in the center of a sizable, satin-finish wood slab is rather dramatic. High-traffic touchpoints – steering wheel, starter button, door handles, seat backs, etc. – feel as though they’ll be pleasing drivers until the third-generation XJ debuts, at least. The one sour spot in the interior, Jaguar’s painfully old infotainment system, is getting a replacement with the all-new InControl Touch Pro system, some time in the middle of model year 2016. If you’re a low-end gadget user you might be fine with this old/base system, but the larger center screen, all new “virtual” instrument display, and better software (I hope), could very well be worth waiting for.

On the other hand, I wouldn’t bother waiting for the upcoming 2.0-liter turbodiesel engine. After driving the supercharged 3.0-liter V6 that will be available in S models at the start, I’m comfortable giving up the fuel economy. S-model V6s produce 380 horsepower and 332 pound-feet of torque, both more than adequate in making the XF feel quicker and faster than ever (well, at least without a V8 under the hood). Sixty miles per hour comes up in just over five seconds in the rear-drive car, and thrust feels readily available from any engine speed. As ever, Jag’s eight-speed ZF automatic transmission is well tuned for sporty driving; I set the trans to Sport mode and mostly ignore the optional paddle shifters until I really feel like playing on switchback roads.

Next post What Are The Most Reliable Car Manufacturers On The Market?