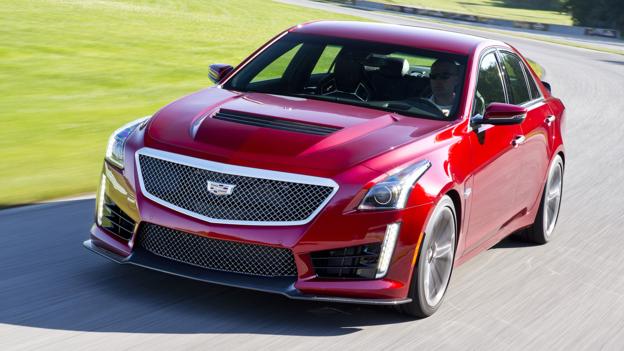 A halo car exists, by definition, to cast a warm glow over the rest of an automaker’s range. Relative to its marque, it is a model that pushes the boundaries of performance, price and exclusivity. So it has been for the CTS-V since the debut of the first generation model in 2004. That car, a brutish, Corvette-engined noisemaker, while impressive in its own way, never really became a threat to its imagined rivals from BMW and Mercedes-Benz. The same cannot be said of the 2016 CTS-V.

“The V is the tip of the spear for the Cadillac brand to show what we are capable of,” said Hampden Tener, Cadillac’s product director. That spear flies at a startling 200mph, making this new car not merely the fastest CTS, but the fastest car ever to wear the wreath and crest emblem.

Cadillac called a cadre of car writers to the US state of Wisconsin to put the new V through its paces on the Road America race circuit, a challenging four-mile-long road course. In the paddock, the mandatory technical and safety briefings were periodically drowned out by the thunderously guttural roar of a car on the track – a car driven by none other than Mark Reuss, president of General Motors North America.

The CTS-V, which in the US starts at $83,995, is propelled by a mildly detuned version of the LT4 engine from the Chevrolet Corvette Z06, a supercharged 6.2-litre V8 that is serves the CTS-V with 640 horsepower and 630 lb-ft of torque, notably more than the current, $93,600 BMW M5 or the $101,700 Mercedes-AMG E63 S. Cadillac claims the five-seater will blast from zero to 60mph in 3.7 seconds. The unmistakable sound, as Reuss hammered this bone-stock car for lap after lap, was that of a racecar. This Cadillac is serious. (Witness the hot-lap video below.)

We’ve seen these track-centric missiles before, of course. They tend to be rough-riding, cramped, uncomfortable machines with overwrought, look-at-me sheetmetal. But this is where the new CTS-V changes the script. Yes, its chassis is 25% more rigid than that of the regular CTS. Even its wheels are 45% stiffer than those on the old CTS-V. But these aspects only allow the new, faster-acting magnetic dampers to work their magic more effectively.

With the drive-mode selector switched to ‘Touring’, the CTS-V is as docile as you’d expect a mid-size luxury sedan to be. Cruising through the country byways that crisscross this part of Wisconsin, the dampers respond to variations and imperfections in the road surface every inch when traveling at 60mph. So even with the super-strong new 19-inch wheels and track-ready Michelin Pilot Super Sport tires, the CTS-V provides a relaxingly controlled ride.

Switch selector to ‘Track’, however, and the car’s demeanor changes dramatically. The eight-speed automatic transmission cracks off upshifts in just 150 milliseconds, the suspension stiffens up and the muffler bypass valves open to let the engine breath more freely. It is here that the car approaches perfection, with impressively powerful brakes crisp turn-in and stupendous grip.

The CTS-V is faultless at speed, and the accompanying soundtrack is suitably invigorating, although we might grumble about a minor deception: Like a growing number of performance cars, the CTS-V uses its stero speakers to pipe a sweetened engine note into the cabin. It’s a small gripe; driving with the windows open, or standing trackside as lead-footed drivers like Reuss roar past, confirms that the CTS-V sounds authentically awesome on its own.

The CTS-V is, at last, a Cadillac halo car worthy of the term. And BMW and Mercedes: The gauntlet has been cast.