Kia GT Getting Closer To Production 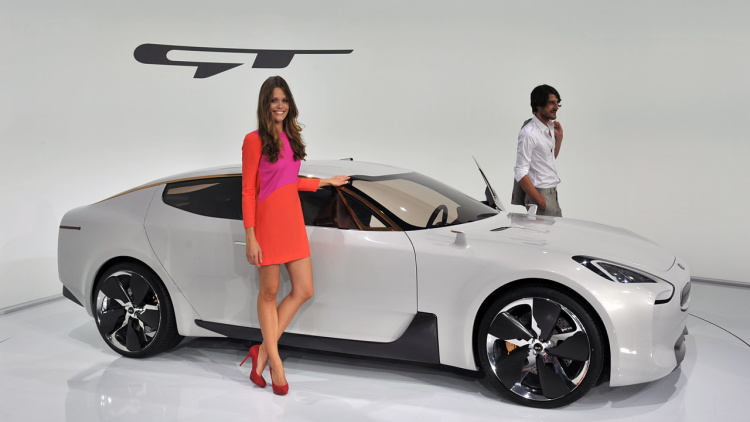 The Kia lineup in the US has no lack of stylish models in their respective segments, but the brand’s range doesn’t have a larger, sporty model to appeal to more enthusiast-minded customers. A fix for that is on the horizon, though, because the official unveiling of the production Kia GT is possibly on the way.

Since debuting at the Frankfurt Motor Show way back in 2011, the GT has kept tentatively stepping closer to the showroom. Coming from the pens of Peter Schreyer and his team, the concept presented a fastback, four-door coupe that was motivated by a 3.3-liter turbocharged V6 with 389 horsepower driving the rear wheels. As far back as 2013, the vehicle was reportedly being heavily considered for production, and last year it allegedly finally received the green light.

With the four-door GT nearing showrooms, the fate of the similarly sized GT4 Stinger coupe concept likely isn’t quite so bright. Kia Motors America Vice President of Product Planning Orth Hedrick recently talked about the future of both vehicles to Australia’s Drive. “I think for us the GT is a sedan so it has a lot broader appeal than a two-door coupe. They don’t do well here. They do really, really good for 18 months and then they really fall off. You can get just as much emotional experience in a sedan, a more practical car, than a coupe,” he said.

According to Hedrick, the four-door coupe appeals to younger buyers who are already more interested in cars. These are just the type of people that any brand wants to grab the attention of. Finally seeing the GT in its production guise is a chance that might be on the way, too. “We’ll have an announcement soon,” he said to Drive.

Next post The Dreaded Traffic Ticket and Your Auto Insurance Rates