Story of a Truck Driver

Truck drivers don’t just go out on the road to get their business done. Very often they’re found at the side of the road helping out others. Take Ron Declan who has been driving used trucks for just over a decade. Cars and trucks whizzes by as he rests against his truck on the shoulder of the freeway – just a few feet from oncoming traffic. Coming so close to this sort of scenario doesn’t faze him much – he’s been in the industry so long. 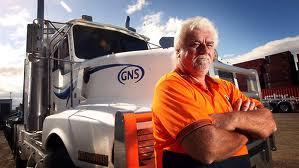 As a tow truck driver, Ron is often called out to unlock cars for customers who’ve forgotten their keys in the vehicle. Another common scenario is changing tires out in the rain, with oncoming traffic in the middle of the night. It’s daily work for him.

But Ron says it is all worth the danger and that he quite enjoys the excitement. He’ll be doing a simple tyre change when all of a sudden a car rolls up the road. It’s this kind of adrenalin that truck drivers seem to thrive on. But it’s also the thrill of getting to help people out there. People are happy to see truck drivers arrive to assist them. The same goes for those out there driving used trucks that stop to help the public when they need it most.

Take snowy season: it’s a busy time for truck drivers who are able to help with pulling people and their vehicles out of ditches and snow banks. Truck drivers agree that in snow conditions drivers tend to go way too fast and that leads to crashes and slips and slides. Truck drivers agree that motorists need to slow down and appreciate the conditions of the road. What to do if you find yourself sliding? Ron highly recommends releasing the gas pedal and steer into it, but don’t try to break or overcorrect it.

Ron has worked long shifts, six days a week, driving used trucks for as long as he can remember. And if he’s not driving, he’s at home and on call, not daring to get too comfortable. He says often he will get home and want to sit down to a meal with the family when he gets a call out. And incidents can happen all times of the night.

But no matter the time of the call and the conditions, Ron always puts safety first. He has completed advanced safety training and driving courses, required of many people driving used trucks. It’s that kind of advanced training that makes sure Ron is able to operate safely and is as prepared as he possibly can be.

Ron relates a tale of a fellow truck driver who was injured in an accident a few short months back when a huge tanker overturned on the freeway. The driver was helping out an SUV driver who had spun out when another truck spun out, which left very little room for the tanker to avoid crashing and the driver had no choice but to swerve. The tanker then smashed into the tow truck, but luckily the driver made it out okay.

Ron says he has had a couple of close calls himself. He says even the thought of reckless drivers makes him so mad when he thinks about how many people die on the road every year.  He takes his hat off to all the other truck drivers out there who make time to help other people on the road.

Previous post The All New Mazda 2: Made Just For You