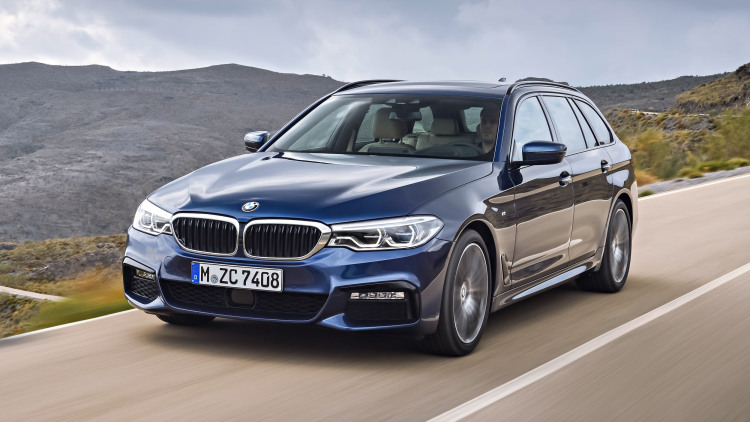 As is tradition, Europe is getting another cool wagon and US buyers won’t. This time, it’s the latest BMW 5 Series Touring. Unsurprisingly, the wagon shares most of its appearance with its sedan counterpart, including the larger headlights and the vent in the lower portion of the front fenders. While the overall look is evolutionary, the rear window is raked more steeply, providing a lower, wider appearance. The tailgate is aluminum and has a separate opening rear window offering access to the larger cargo area.

The 5 Series Touring will be offered with BMW’s gas and diesel turbocharged four-cylinder and six-cylinder engines. The diesel four and six make 190 horsepower and 265 horsepower. The gasoline four-banger makes 252 horsepower and the six makes 340. Only the six-cylinder models are offered with all-wheel drive, while four-cylinder buyers will have to make do with rear-wheel drive. All models get standard air suspension in the rear, and all come with an 8-speed automatic, except the inline-four diesel. That car also offers a 6-speed manual.

The wagon will make its official debut at the Geneva Motor Show in March. Then, for lucky European customers, the wagon will go on sale in June.

Next post I Don't Want Your CarFax - Give Me Edmunds