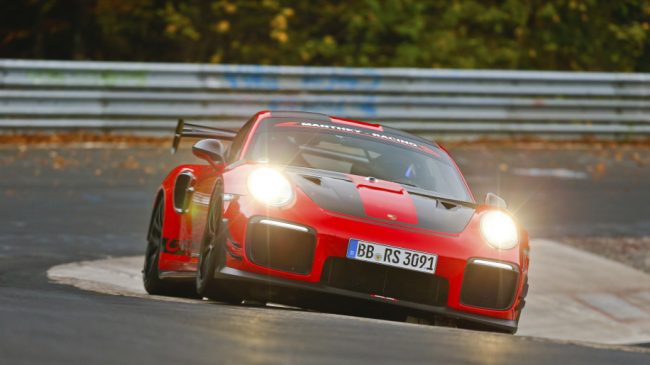 For the past few years, lap records at the Nürburgring-Nordschleife have been dropping with increasing regularity. Just over a year ago, a then-new Porsche 911 GT2 RS set a 6:47.25, plucking the crown from the hands of the Lamborghini Huracán LP 640-4 Performante. Then this summer, the Italians stormed the ‘Ring and claimed the record when the Aventador SVJ set a time of 6:44.97. Today, Porsche announced the GT2 RS has retaken the road-legal car record — with a sizable caveat — with a new time of 6:40.3. Let’s see how long this new number stands.

We say road-legal because this particular GT2 RS was not stock. The car was modified and “set up for the ‘Nordschleife’ by Porsche engineers and Manthey-Racing experts.” Manthey-Racing fields a pair of Porsche 911 RSRs in the World Endurance Championship. The company makes aftermarket (but road-legal) parts for Porsches, too. Some of those parts are on this car, helping shave nearly 7 seconds off last year’s lap time.

It’s unclear what those modifications exactly include, as Porsche’s press release simply states that “the targeted modifications included the areas of chassis and aerodynamics. The technicians focused on suitability for on-road driving at all times.” Likely upgrades include suspension and aero, though we’ll have to wait to hear from Manthey-Racing.

All the modifications are road-legal in Europe and available to the public through Manthey-Racing, though it’s unlikely the parts will be easy to come by here in the U.S. Customers can order fully-prepped cars dubbed the GT2 RS MR. Like the last GT2 RS, this car was also fitted with a racing bucket seat, though Porsche says there was no weight savings.

The lap itself was organized by both Porsche and Manthey-Racing and was set by Lars Kern on Oct. 25. Porsche of course has the overall lap record with a 6:11.13 set by the singleminded 919 Hybrid Evo.

Next post Are You Appearing for Motorcycle Driving Test? A Few Tips to Clear the Test