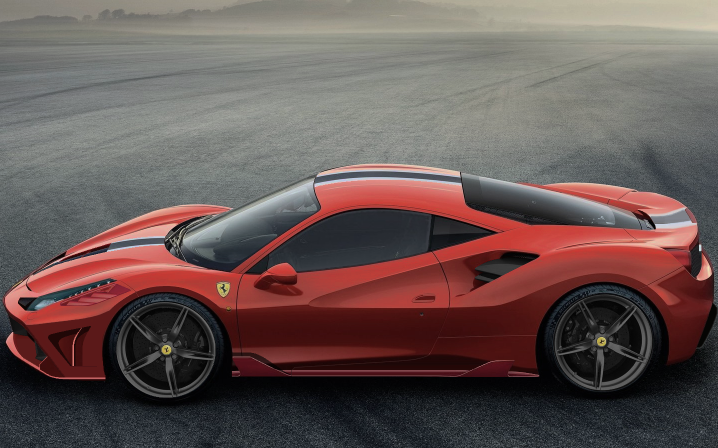 Today, Ferrari released a teaser video previewing a new, hardcore version of the 488. Usually, teaser clips like this aren’t worth your time, but if you’re quick hitting the pause button here, a lot of interesting details are revealed. Notably, a lot of serious-looking aero components that differentiate this car from the base 488 GTB. Here’s what we saw.

This video clip opens with a Ferrari 488 Challenge and one of AF Corse’s 488 GTE race cars lapping a track, which plays into rumors that the hardcore 488 will get a race-derived engine. At the front, the hardcore 488 street car has a big splitter and a huge cutout that appears to be designed to get air to flow over the hood.

You get an even better view of that dramatic front hood in the picture above. It looks to us like Ferrari will sacrifice luggage space for aero efficiency here, much like the 458 Speciale. If you’re disappointed by that development, this probably isn’t the car for you.

It’s a little hard to tell in this image, but it appears the hardcore 488 gets a huge, race-car-esque diffuser. Previously, we reported that this car will get a 488 GTE-inspired carbon diffuser, and this seems to confirm that.

You can also just make out the side of that huge diffuser in the image of the car sliding above. Note the gap between the red body of the 488 and the black diffuser. The intake seen here also looks somewhat different than that of the 488 GTB, though frankly, it’s too blurry to know for sure.

There’s not a ton to see here, other than a slightly more prominent rear decklid spoiler on this 488. No big fixed wing—that’d be too gauche for a Ferrari street car.

Above is the final, clear image we could grab from this video. The car is quite far away, obviously, but even from here, you can see that the rear is quite different to the 488 GTB.