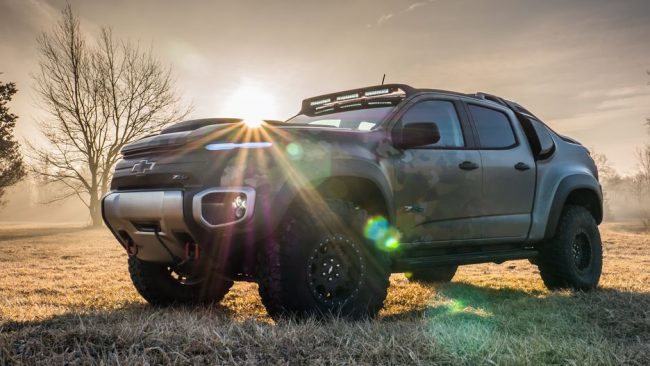 General Motors’ new military defense unit is developing an ultra-rugged, heavy-duty version of the Chevrolet Silverado that it says is powered by a next-generation hydrogen fuel cell and advanced battery systems.

It’s called the Silverado ZH2, an echo of the smaller Chevy Colorado ZH2, a fuel-cell pickup co-developed by GM and the U.S. Army Tank Automotive Research Development and Engineering Center in 2016. It features a heavy duty strength design, a “race proven multimatic dynamic suspension” and a range of more than 400 miles.

The Silverado ZH2 features GM Defense’s Hydrotec fuel cells and Jouletec battery system. The former doubles as a mobile power source of between 50 and 100 kilowatts and a mobile water source, capable of generating two gallons of water per hour as its only waste product. It also offers rapid recharging in just 3 minutes. Looks-wise from the renderings in the video, the front end isn’t far from the photo of the 2020 Silverado HD Chevy teased earlier this year.

GM Defense spun out this year to fulfill contracts for military programs, filling a void after the automaker sold its defense unit to General Dynamics Corp. for $1.1 billion in 2003. The unit also developed the skateboard-like SURUS hydrogen fuel-cell platform capable of off-road, autonomous driving and acting as a mobile power source.