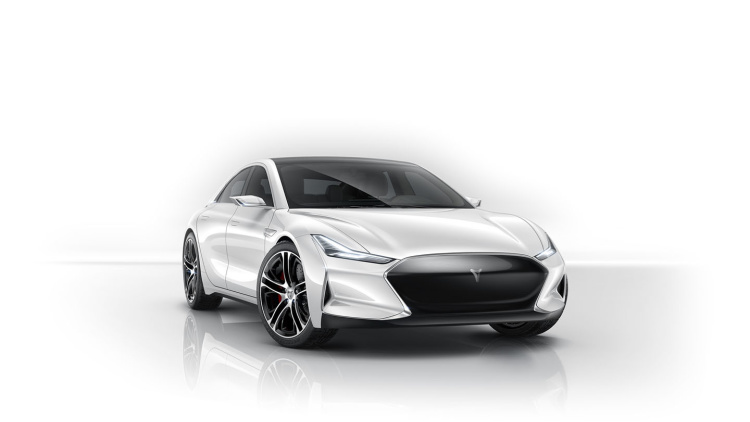 If you subscribe to the notion that a product hasn’t really arrived on the global stage until a Chinese company has created a knockoff, then it’s time for the Tesla Model S to take a bow. The Youxia X, which was just unveiled in China, desperately wants to be a Tesla. The design similarities between the Model S and Youxia X are impossible to ignore, from the blacked-out front fascia to the shape of the car’s three-pointed logo. Both are also very smoothly shaped sedans, but the Youxia incorporates some good-looking Y-shaped taillights at the rear. Inside, the vertically oriented touchscreen in the center is clearly cribbed from Tesla.

While its shape looks familiar, it’s clearly not a direct copy, and regardless of what it looks like, this electric sedan might be one of the most offbeat vehicles to come along in a while. For example, the front grille has a customizable display that’s capable of showing a sweeping red light inspired by KITT from Knight Rider. According to Car New China, the Knight Rider connection goes even deeper. The name Youxia Motors apparently comes from the ’80s TV show’s localized name there, and the sedan’s infotainment system is called KITT OS. Beyond the normal controls, it can pipe in the sound of cars like Ferrari 488 GTB or Jaguar F-Type into the interior.

According to Youxia’s website, the X is powered by an electric motor making 362 horsepower and 325 pound-feet of torque. The base battery offers a range of 137 miles – it’s listed as having a 40 kW capacity, presumably a typo for 40 kWh. Additional battery options will allow 205 miles from 60 kWh and 286 miles from an 85 kWh unit.

Prices in China are slated to be around $47,000 to $63,000 before the country’s roughly $15,000 incentive on EVs, Car News China reports. Of course, all of these specs and figures are just promises at the moment, since production of the Youxia X isn’t slated to begin until late 2016 and the first deliveries in 2017. If Tesla’s lawyers don’t get to the company first, the X still has a whole lot to deliver on.

Next post The 5 Safest Family Cars On The Market