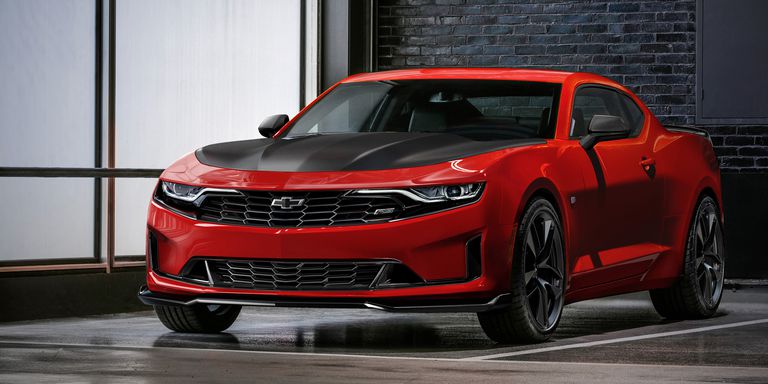 Today, Chevrolet unveiled a new look for the 2019 Camaro, and the SS looks exactly like Bumblebee from Transformers: The Last Knight. We’ll let you be the judge of whether or not that’s a good thing, but what is inarguably cool is a new Turbo 1LE model that brings track performance to the entry-level Camaro. The Camaro SS also gets a new optional 10-speed automatic transmission with launch control and line lock standard.

We’re not going to dwell on the Camaro’s new face too much other than to say that the SS now gets Chevy’s hollow “Flowtie” for improved airflow. The ZL1 maintains its previous front facia, as it was optimized for better aerodynamic performance.

The Turbo 1LE is the most interesting bit of news here, even if its 275-hp 2.0-liter four-cylinder remains unchanged. It gets a suspension package similar to that of the excellent Camaro V6 1LE, Brembo Brakes, summer performance tires, and a new Track mode. The only transmission option is a six-speed manual, and Chevy says the Turbo 1LE has a perfect 50-50 front-to-rear weight distribution. Pricing hasn’t been announced yet, but considering the V6 1LE starts at around $33,000, the Turbo 1LE should be a track-day bargain.

Across the lineup, there’s a next-gen version of Chevy’s infotainment system optional, and forward-collision warning. The optional Performance Data Recorder has been updated too, and a rear-view camera mirror now comes standard on 2SS and ZL1 trims.

So other than that new face, and some new tailights, the 2019 Camaro isn’t too different than the 2018. Whether that’s a good thing or not depends on your taste, but ashetics aside, we can’t wait to drive the Turbo 1LE.