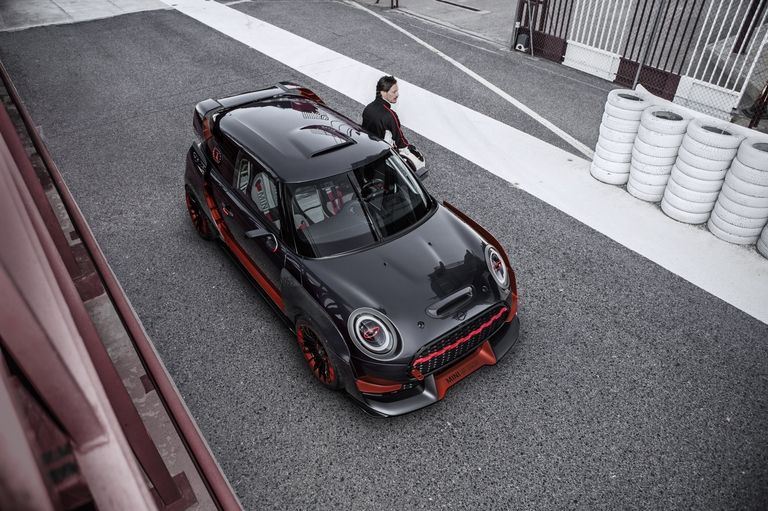 Mini has revealed yet another concept car in preparation for the Frankfurt Auto Show in Germany next week. Following the Mini Electric Concept, the Mini John Cooper Works GP concept is a design study full of cues hinting at the future of the brand’s performance division. And it actually looks pretty sweet.

The John Cooper Works GP concept, according to Mini, draws from the previous GP performance line produced by the company back in 2006 and 2012 in limited numbers. The new concept has flared fenders, a big wing, 19-inch wheels, big front air scoops, an extra-wide track, and carbon fiber everywhere. The designers really didn’t hold back this time around.

Inside, you’ll find a roll cage, two bucket seats with five-point harnesses, a paddle-shift transmission, and a digital instrument cluster. No drivetrain specifications or performance figures are given—this is a concept, after all.

The “0059” stamped on either front fender and outer shoulders of the seats represents the year the first classic Minis were produced: 1959. That’s not the only stand-out design cue either. There’s a huge “MINI” logo plastered on the rear hatch, while the taillights each incorporate one side of the Union Jack. The shoulder straps have “MINI” wording, and the lower front air scoop has the brand name printed offset to the right side. And if you haven’t noticed, there’s red accents everywhere.

The John Cooper Works GP concept will premiere alongside the Mini Electric Concept next week at the Frankfurt Auto Show. If we’re lucky, maybe the next GP will look a little something like this car. Hopefully. But probably not.