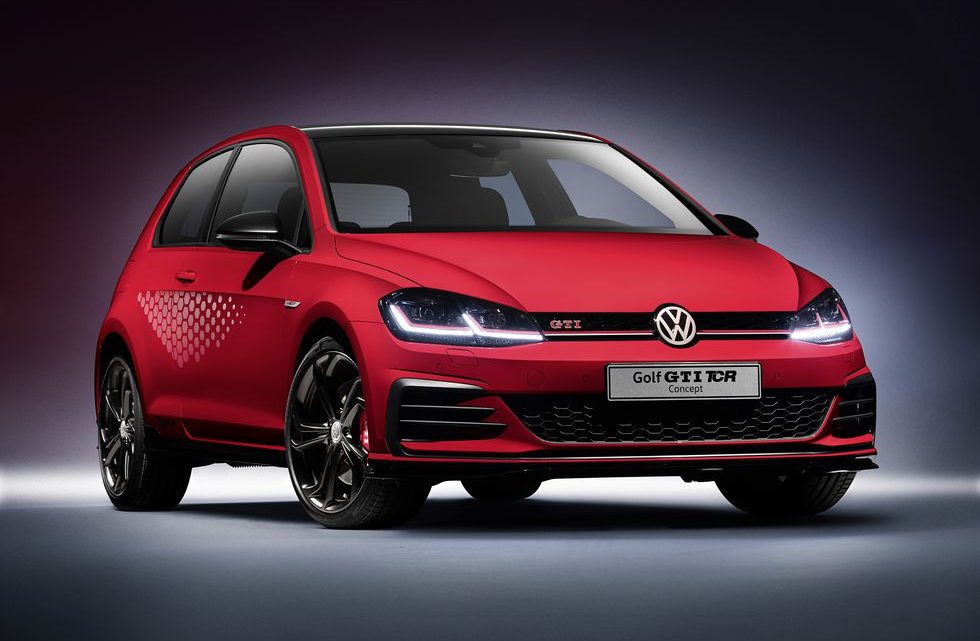 If the stripped-down track-ready Volkswagen GTI Clubsport wasn’t sporty looking enough for you, don’t worry, VW has another performance-minded special edition GTI on the way; one that borrows its underlying DNA from the company’s TCR race car that currently competes in the Pirelli World Challenge.

As the name suggests, the GTI TCR Concept pays tribute to the customer race car already offered to teams. The 2.0-liter turbo four makes 286 horsepower (just six horsepower off the Golf R) and 273 lb.-ft. of torque. Power goes to the front wheels via a DSG seven-speed dual-clutch transmission (a sharp contrast from the manual-only Clubsport). While it is just a concept for now, VW says it intends to put the car into production—though like the Clubsport, the TCR is not bound for US shores.

Aluminum-alloy 18-inch wheels are standard, as are perforated brake discs with “special” brake calipers and pads which the company says are “designed to slow the production vehicle just as effortlessly as the race car.” An optional upgrade package includes 19-inch wheels, a 164 mph speed limiter (up from 155), and three-way adaptive damping with sporty, comfort, and normal chassis settings.

On the outside, the TCR Concept gets a new front bumper with bigger air intake sections and a front splitter. It also gets bespoke sideskirts, “TCR” side badging, and a diffuser. Those sweet honeycomb decals on the side of the car are optional. Inside is pretty much standard GTI save for some cool seats with a red cross-hash pattern and microfiber cloth inserts.

The car was unveiled at the annual GTI meeting in Wörthersee, Austria, where owners from all generations of GTI gather to celebrate the car and its fantastic legacy. This is the same event where the wild mid-engine GTI W12-650 and GTI Roadster Vision Gran Turismo concepts made their debuts.

Though it may not seem as extreme as the stripped-out, three pedal Clubsport or Clubsport S, it’s still nice to see VW putting out cool driver-focused special edition versions of its greatest car out today. Especially ones with nearly 300 horsepower on tap.