The 2017 Hyundai Ioniq Fuel Economy Numbers Are Official, And Impressive 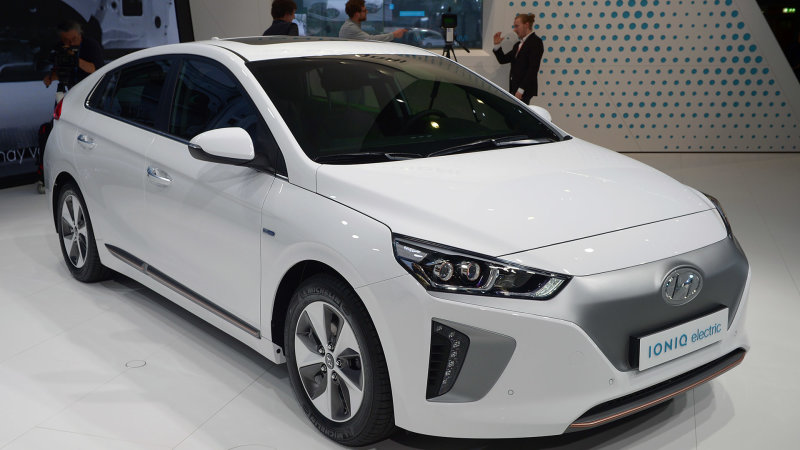 For reference, the 2017 Toyota Prius is no slouch, getting 50 mpg highway, 54 in the city, and 52 combined according to EPA testing. Now let’s compare to the Ioniq, which in regular form gets 54 highway, 55 city, and 55 combined. It bests the traditional hybrid Prius most significantly on the highway. The plug-in Blue achieved 59 highway, 57 city, for a combined 58 mpg rating. As we mentioned in our earlier deep dive on the Ioniq range, the plug-in will also do 31 miles on electricity alone.

As suspected, the range of the Ioniq Electric is going to be an issue for the company. The EPA confirmed the range to be 124 miles in total, returning an MPGe rating of 122 highway, 150 city, and 136 combined. We know that Hyundai is self-conscious of the range of the initial model, which looks unimpressive compared to the crop of 200-plus-mile range EVs coming to market soon, like the Bolt. Hyundai recently told Automotive News that a 200-mile range version will be coming quickly, by 2018, so the Electric won’t be hobbled for too long.

As long as we’re comparing it to the Bolt, it should be noted that the MPGe numbers are better, even if the total range isn’t. The Bolt is only good for 110 highway, 128 city, and 119 combined MPGe – to put it another way, the Ioniq Electric consumes 25 kWh per 100 miles, while the Bolt consumes 28. A small difference, to be sure, but worth noting.

Don’t forget that there’s a fourth Ioniq out there, which we rode in recently, although it’s notably mainly for its autonomous tech rather than its drivetrain.