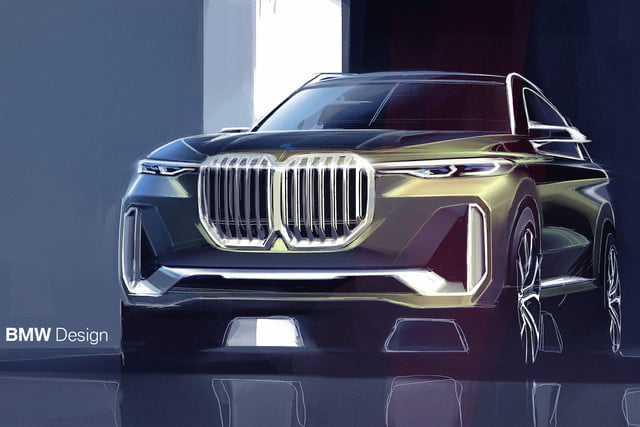 With the unveiling of the BMW Concept X7 iPerformance at the 2017 Frankfurt Motor Show, the BMW Group is not only pulling back the covers on a new model concept for the luxury segment, it is also introducing a whole new take on luxury for the BMW brand.

The BMW Concept X7 iPerformance embodies this understanding of luxury in the form of a striking exterior composed of intently focused lines, and combines it with a generously-sized, six-person interior pared down to the essentials: elementary forms, high-class materials and a state-of-the-art infotainment system brimming with connectivity.

The Concept’s iPerformance badge denotes the presence of groundbreaking BMW eDrive technology allied with a BMW TwinPower Turbo petrol engine to create an exceptionally efficient and dynamic plug-in hybrid powertrain that excels in all driving situations – including running with zero local emissions.

This study car offers a look ahead to the future production model set to make its debut in 2018. The forthcoming BMW X7 forms part of the largest model offensive in the company’s history.

As part of its NUMBER ONE > NEXT strategy, the BMW Group is seeking to substantially increase its sales and revenues in the luxury class. The BMW X7 has a key role to play here.

A new face in the BMW X family

The front end of the BMW Concept X7 iPerformance is one of its most eye-catching angles, the vehicle’s height alone ensuring it rises prominently over the road. In an all-new interpretation of classical BMW elements, the front-end design groups together the various facets of the vehicle into a powerful visual statement. The large, vertical kidney grille at the heart of the upright front-end silhouette hogs the attention. The grille frame and bars are single-piece and solid in design, as if hewn from a single piece. Look at it again, though, and fascinating contrasts emerge between gleaming edges and matt surfaces, all of which breathes extra vibrancy and class into the frontal impression.

The upper sections of the slim, elongated twin headlights with BMW laser light link to the large kidney grille. A blue X signature in BMW laser light provides a confident pointer to the Concept’s membership of the SAV family from BMW. The headlights and kidney grille combine to create an exciting contrast of horizontal dynamism and vertical solidity,

A prominent bar extends across the full width of the front apron in its lower section, before rising vertically to frame the outer air intakes at their upper edge. This lends the front end additional stature. Quasi-vertical aero lips further accentuate the car’s powerfully assured stance on the road. Customary X features like the trapezoidal bumpers and underguard, meanwhile, are merely hinted at, their understated design serving the cause of clear and exclusive surfacing.

As part of its forthcoming model offensive, BMW has developed a new presence for its luxury cars that sees the profile and positioning of the most exclusive members of its range refined into a distinct product category.

The new BMW 8 Series, new BMW X7, BMW i8 and new BMW i8 Roadster will join the BMW 7 Series in the brand’s significantly expanded luxury segment line-up. The identity and attitude shared by BMW’s elite models are echoed in a newly designed logo which combines a black-and-white version of the manufacturer’s roundel first used 100 years ago with the company name “Bayerische Motoren Werke” written out in full.

With its classical, understated aesthetic and the company’s original name spelt out, the logo highlights BMW’s inimitable history. The boldness to explore standalone solutions and concepts, and the ability to take on challenges and emerge from them stronger, are deeply-rooted elements of BMW heritage.