After a two-decade hiatus, the 8 Series will return to BMW’s lineup in 2018. While we wait, BMW is previewing its future range-topping coupe with a concept debuting at the Concorso d’Eleganza Villa d’Este competition in Italy. 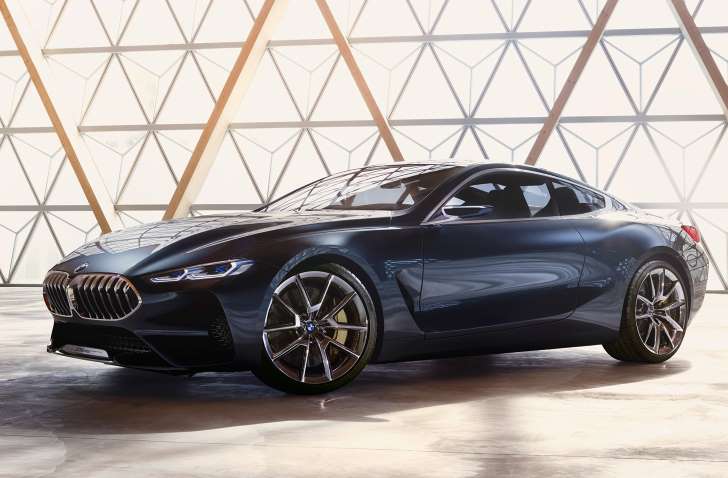 In contrast to the boxy proportions of its predecessor, the new model features lines that flow like water over its Barcelona Gray Liquid body. Creases along the hood and large side air intakes give the concept a fluid look. Bold arches framing 21-inch alloy wheels hint at the car’s rear-wheel-drive athleticism.

Up front, the model features a new interpretation of the brand’s signature kidney grille, which rather than lying flat, has a three-dimensional look. The kidneys, which lose their traditional circular shape, are joined together by an unbroken frame to form a single unit. Slim laser headlights complete the front end. Whether these units will make it to production is anyone’s guess, though Audi recently introduced laser lights for the new R8 supercar going on sale in the U.S. this summer.

From the back, the 8 Series looks particularly unique from other BMWs. In addition to wide, horizontal taillights with L-shaped LED elements, the model features a rear spoiler molded into the trunklid and trapezoidal exhaust tailpipes. A dark carbon-fiber diffuser can be found in the lower section of the rear apron.

Inside the cabin, look for sport seats with a carbon-fiber shell, red-anodized paddle shifters, and aluminum accents. The iDrive controller used to operate the car’s infotainment system is made from Swarovski glass.

When the 8 Series goes to market, it will compete with the Mercedes-Benz S-Class Coupe and the Lexus LC 500. Powertrain options remain unknown at this point, but the coupe could borrow engines from the 7 Series, including a 3.0-liter turbo-six, a 4.4-liter twin-turbo V-8, and even a 6.6-liter twin-turbo V-12. M Sport or M Performance variants are also possible. 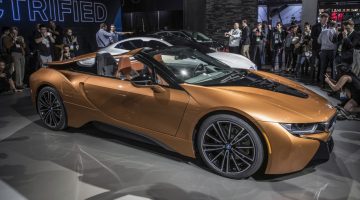