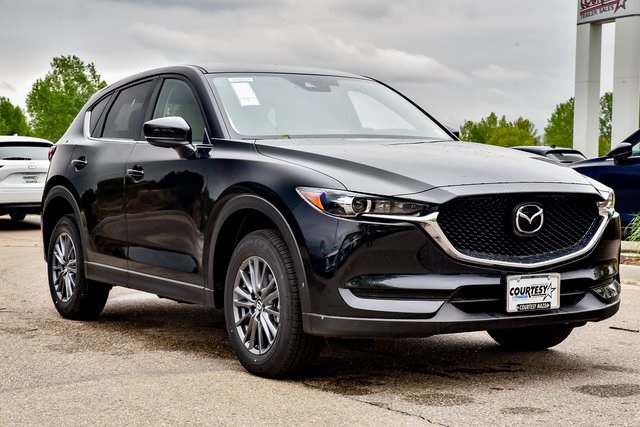 We’re already seen how Mazda’s largest crossover, the CX-9, does at stuffing luggage inside its cargo hold. Now it’s time for the next rung down the Mazda ladder. The 2019 Mazda CX-5 has 30.9 cubic-feet of space behind its raised back seat, which on paper, is considerably less than its top competition. The Toyota RAV4 and Honda CR-V both have 37.6 cu-ft, while the Subaru Forester as between 33 and 35 depending on options. However, the CX-5 does have more than the Chevrolet Equinox (29.9), Jeep Compass (27.2) and 2020 Ford Escape when its sliding back seat is in its aft-most position (33.5 when all the way forward).

Basically, this compact Mazda’s cargo area is midpack, which makes it a good choice for my first luggage test of the segment. Let’s see how much of the luggage in my garage fits inside. As a refresher, I use two mid-size roller suitcases that would need to be checked in at the airport (26 inches long, 16 wide, 11 deep), two roll-aboard suitcases that just barely fit in the overhead (24L x 15W x 10D), and one smaller roll-aboard that fits easily (23L x 15W x 10D). I also include my wife’s fancy overnight bag just to spruce things up a bit (21L x 12W x 12D).

OK, now let’s remove the cargo cover, which is an unusual design. Rather than a roller-type cartridge that you manually pull into place or a rigid hatchback-like unit that rises up when the liftgate goes up, the CX-5 basically combines the two. The forward bit is attached to the liftgate and unspools when opened.

To detach it, you need to unfasten these plastic clamps and then remove the cartridge reel much as you would a normal cargo cover.

All of it! That above configuration is just the first thing I came up with, but there’s likely additional Tetris formations to be found. Note that the tailgate does close here but the middle cases’ wheels are awfully close to the window.

I’m not going to stop there, though. I went ahead and rummaged through my garage to see what it would take to fill’er up.

There you go: one duffle bag and one gym bag stuffed into the spaces. You could probably fit a grocery bag right in front there, too.

Basically, you’re looking at 6-plus suitcases for a vehicle that seats five people. Not bad at all.

Previous post 2020 Toyota Pricing For Tundra, 4runner And Sequoia Is Out, And They're All More Expensive