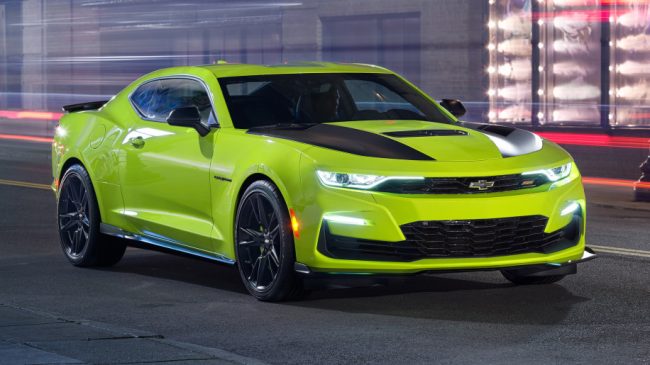 Chevrolet announced that it will be showing off a mildly customized 2019 Chevy Camaro at this year’s SEMA Show. And it’s rather interesting for a couple of reasons. First of all is the color, which is aptly named “Shock.” It’s a tennis ball yellow color that’s actually very similar to what was used on the 2017 Chevy Camaro Turbo AutoX concept from a couple of years ago. It will be available early next year on the 2019 Camaro.

The other interesting part of this Camaro is that it could be considered an admission from Chevy that they didn’t quite nail the looks of the 2019 Camaro SS. You see, this glowing show car is an SS, but the front fascia is very clearly different from the production model. The production SS has a giant black center that blends in with the rest of the grilles, and features the bowtie badge square in the middle. The Autoblog staff is divided on the new face – some say it looks like a 2018 Camaro hit a large animal and punched a giant hole through the middle.

But this show car moves the badge to the upper grille, like on the 2018 model, and paints the center bar the same color as the rest of the body. The result is something that looks like the much more conservative four-cylinder and V6 Camaros, and to the 2019’s detractors it’s a major improvement for the SS. It blends with the rest of the generally unchanged body, and looks sleeker than the full, flat face of the 2019 SS model.

The question is, will Chevy make this less controversial fascia available to the public? The company says it’s just a concept design, but it’s possible Chevy will be gauging the public’s reaction to decide whether to introduce it. If any stylists, executives or other GM employees are reading (and care about our opinion), we’ll cast our vote in favor of the show car’s face.