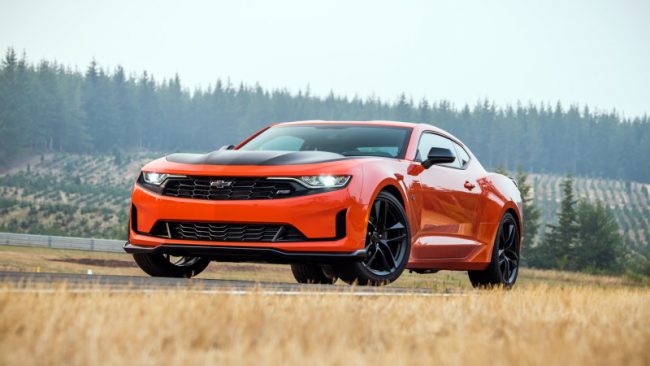 There’s a riddle at the heart of the 2019 Camaro Turbo 1LE, and it’s figuring out which of three Camaros it actually is. There’s the car Chevy wants it to be, a hot-hatch fighter and genre-buster that brings in people who’d never consider a pony car before. There’s the car its enthusiastic fans want it to be, which is a Mustang trouncer that has a superior chassis and nails all the intangibles. And then there’s the car it actually is, something we can’t easily sum up. Frankly we wouldn’t be surprised if potential buyers tuned out before they could wrap their heads around this turbocharged, track-oriented Camaro.

For a few people out there – maybe you? – that’d be a shame. Chevrolet doesn’t expect to sell many Turbo 1LEs (perhaps 1,000 a year), but those who buy it with their eyes wide open and an understanding of its strengths and weaknesses will love what this chassis can do out of the box. But that’s a subtle sales pitch in a market dripping with cheap-and-easy horsepower.

A quick note: The 2019 Camaro Turbo 1LE starts at $30,995 (the Turbo and V6 1LE packages are both $4,500 over the base 1LT trim), with the further options of Recaro front seats for $1,595 and the Performance Data Recorder for $1,300. There is a new trim structure, with 1LT resembling the 2018 but now with available 8-speed auto, a revised 2LT (leather, dual climate control) and new 3LT (2LT plus nav, Bose premium audio, available head-up display, standard V6 or no-cost turbo option). We drove a 3LT on the track and a 1LT with Recaros and a Bose system on the street.

The rounded-quadrangle taillights are a wash when compared to the outgoing units – perhaps they’re now a bit more distinctive. The strange placement of the submodel badge (RS, SS) remains, tacked onto the bumper as if the design team just played “pin the badge on the donkey.

The overall impression of fun on track jibes with Associate Editor Joel Stocksdale’s impressions of the prototype Turbo 1LE’s chassis that he drove at Las Vegas Motor Speedway back in April – as it should, since nothing has changed about the car since then. Joel said it felt “playful and predictable without being punishing” –

This brings us to what the car is: slightly lost. Chevy’s targeted competitors reveal its confused mission, and its more-realistic competition from Ford reveals its deficits. Instead, when we think of what cars to recommend in this segment, the Turbo 1LE will struggle to rise to the top of the list – and leave us playing a tantalizing game of “what if” to ourselves about what the Turbo 1LE might be with a better four-cylinder engine, different styling, or even a new name. Heck, even a power bump over the regular Camaro Turbo might redeem the engine, the Turbo 1LE’s heart and biggest liability.

But we remain convinced that anyone whose heart says Camaro Turbo 1LE, who loves leaving it all out there on track, won’t regret their purchase … at least for a while.

Next post 2020 Ford Mustang Gt500 To Be Sold With A Dual-Clutch Transmission Only?