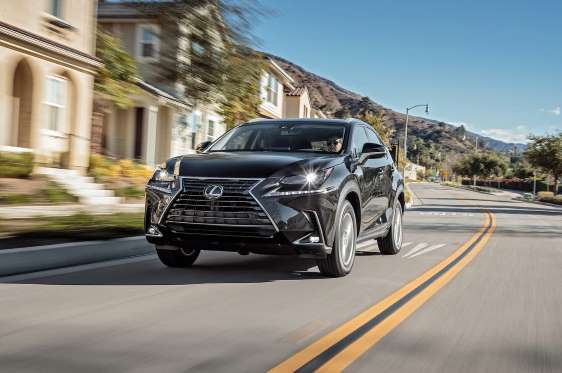 After a few years on the market, Lexus has decided its now second-smallest crossover could use a little pick-me-up, so the NX is getting a few upgrades for 2018. Look closely, though, because they aren’t obvious.

Aside from some new paint colors and wheel finishes, the big difference you’ll see first on any 2018 Lexus NX is the number. For reasons completely unexplained by Lexus but probably having something to do with the brand’s long-running use of larger numerals, it’s the NX 200t no more and may now be referred to as the NX 300. No, that doesn’t mean it gets a V-6 now, just the same 235-hp turbocharged I-4 you know and its 258 lb-ft of torque.

Inside, you might notice an 8.0-inch infotainment screen is standard, and a larger 10.3-inch screen is fitted if you’ve ordered navigation (we didn’t). The touchpad controller remains and is larger but no easier to use or less distracting. All of it comes loaded with the latest Lexus Enform apps and a new Wi-Fi hot spot. Turn your attention to the 4.2-inch display nestled between the gauges, and you’ll find the Lexus Safety System+ is now standard and brings with it automatic emergency braking, adaptive cruise control, lane departure warning, automatic lane keeping, and automatic high-beams.

Actually living with it, we again come away with mixed impressions. On the plus side, the imitation leather wrapping the seats of our base model NX 300 was shockingly convincing. It’s soft and supple and looks all the world like the real thing. Although the seats themselves were comfortable, we were less thrilled with their mounting.

The place to get excited is the spreadsheet. At $36,980 to start and $40,463 as tested, our NX 300 was surprisingly well equipped. In addition to the standard safety equipment and imitation leather seats, we also picked up seat heaters and coolers for the front row, blind-spot monitoring, auto-dimming mirrors all around, parking sensors, a moonroof, and a power tailgate that opens when you kick your foot under the back of the car.

Although it might not live up to the claims of enhanced sportiness, the renamed Lexus NX 300 continues to be a solid luxury crossover and an impressive deal in its segment. We’d like Lexus to have another go at the suspension tuning and maybe give the user interface a rethink for the next model, but in the meantime, it’ll serve its target audience quite well.