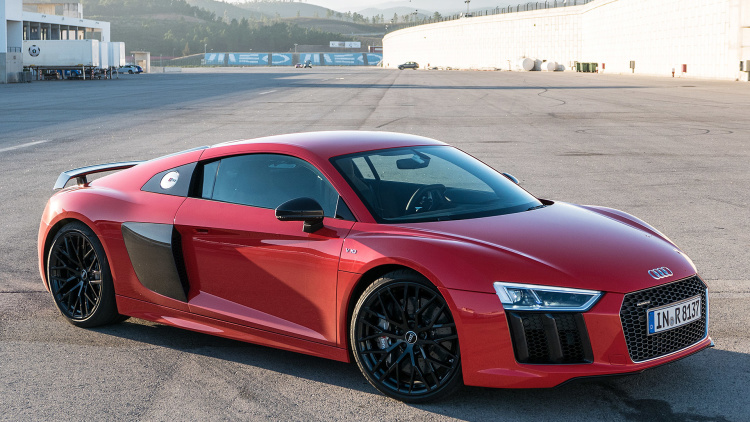 You might think the new Audi R8 is a Lamborghini in a business suit. You’d be wrong; the Huracán is an R8 in a Heinlein shock trooper suit. This is the most raucous, rowdy Audi yet, and it’s most certainly a supercar – even when parked next to its bawdier Italian cousin.

Although the Huracán has been on the street for nearly a year now, the new R8 and the Lambo were developed in parallel. Audi handled most of the engineering workload, with the Huracán receiving Lamborghini’s styling and tuning finesse on top of its Audi-built V10 engine and seven-speed dual-clutch transmission. The R8 gets Audi’s motorsports-inspired best. Tally it all up and you have two very different cars built from very similar components.

Of course, that could also be said of the R8 and its racing doppelgänger, the R8 LMS, the racecar built for WEC endurance racing. That car, in fact, is more closely related to the R8 than is the road-going Huracán – the wheelbases are the same, 50 percent of the parts are shared, and the bodies-in-white are built on the same line. The racecars are pulled off line for occasional tweaks or additions, then slotted back in to run through most of the same workflow as the R8s that will eventually end up on the streets.This development program pulls from the best of a legendary supercar brand’s flair for presence and idiosyncrasy. It also takes lessons from the company’s customer racing effort, as well as Audi’s own impeccable taste in road manners and clean, elegant design. The end result is an inspired supercar with daily-driver comfort and a surprisingly aggressive side.

Like a new pair of your favorite shoes, the new R8 is familiar and foreign at the same time. It’s more comfortable and compliant on the street, thanks to a new chassis that’s 40 percent stiffer, allowing for a more forgiving suspension tune. The completely reworked 5.2-liter V10 engine has a Great White bite to go with its Rottweiler bark, but only after you provoke it from polite mode with a press of either the Drive Select button or the exhaust sound switch.

The seats are comfortable – that can be said for both the standard sport seats or optional carbon-shell, race-style buckets. Wrapped in a cabin that’s much more futuristic and forward-looking than the last R8, the overall driving experience is refined, luxurious, and high-tech.This is more than just a comfy supercar, however. Audi’s new MMI system – along with the virtual cockpit, as debuted at the 2015 CES in a prototype Audi TT cabin – powers the R8’s instrument-panel-mounted infotainment system, offering a very different experience while adding impressive processing power and some groundbreaking new features. At 12.3 inches (1,440 by 540 pixels), the screen in the instrument cluster is large, high-resolution, sharp, and rich with color. In our driving, we never experienced any significant wash-out or visibility issues; Audi has sorted the display. An NVIDIA Tegra 30 processor with 2 GB working memory handles the 3D graphics, Google Earth maps display, and other visual elements. The high-powered graphics processor makes for a beautiful, computer-like experience, with no perceptible lag or hesitation in any of the transitions or animations.

Without a separate display for navigation, the instrument panel has to do double duty. At first, this can be a bit disconcerting. But with just a few miles of use, it becomes intuitive and actually quite handy, having all off the information you need for both typical driving and finding your way to new destinations in one central location, just below your line of sight.

The virtual cockpit screen, paired with detailed Google Earth maps, provides an unmatched level of detail for Audi’s navigation, which in turn enables some unique abilities. At a racetrack, for example, the virtual cockpit display can show you every turn, along with a live display of your R8’s position on the track. A performance mode view offers a large, central tachometer display, which shows shift points in the background color when the seven-speed S tronic dual-clutch gearbox is being shifted in manual mode – a very handy visual reference that leverages the driver’s peripheral vision to make sure you never overshoot the 8,500-rpm redline.We put that performance mode view to good use, both on the streets around Faro, Portugal, and on the track at the Autódromo Internacional Algarve, also known at the circuit at Portimão. Both the standard R8 V10 and V10 Plus models were on offer at the event, with the V10 limited to street driving, and the V10 Plus available on both street and track. The standard V10 model packs a 540-horsepower, 398-pound-feet version of the 5.2-liter V-10 engine, while the V10 Plus gets 610 horsepower, 413 pound-feet of torque, and a carbon spoiler among its upgrades.

Whether you’re in the V10 or the V10 Plus, choice of driving modes including the standard Dynamic, as well as a customizable Individual setting. But the real performance mode comes with a simple press of the checkered flag button, which puts the R8 into Race setting. This increases the headroom allowed on the slip and yaw profiles, meaning the traction and stability controls are much less intrusive – so uninstrusive, in fact, that you can easily spin the car if you’re not careful. Part of that spin-able behavior owes to the fact that the new R8 is much more a classical mid-engined car than its predecessor, especially when pushed to the limits on track.

Where the previous R8 tended to wag the tail under both straight-line and trail braking, transitioning to understeer at steady state and even more understeer when back on the power at corner exit, the the new car’s default mode is oversteer. It’s a very gentle and predictable oversteer, however, especially under light trailing brake pressure at corner entry, allowing the car to get right down to the apex with ease.Holding the line in longer corners is a matter of balancing the car on the nose with the throttle; it defaults to neutral, consistent cornering. Going back to throttle for corner exit, the Quattro all-wheel-drive system channels most of the power rearward, leaving the front tires to keep the desired line all the way to track out, with very little (and in some cases, absolutely no) understeer.

It’s a remarkable change, and clearly both a result of the improved aluminum/carbon fiber chassis and the Audi engineers’ choices in tuning the car’s behavior at the limit. Offering a car this balanced, this controllable, demonstrates a surprising amount of faith in the typical R8 buyer, as access to all of this razor-sharp handling comes with the press of a single button. Bravo, Audi.

But it’s not just mid-engine finesse with the new R8. If anything, you can under-drive the R8 and still end up being among the fastest at a typical club track day, thanks to the car’s phenomenal acceleration, which feels even stronger than its estimated 3.2-second 0-60 sprint (in V10 Plus form). Get the car pointed down toward the apex, mash the right pedal, and a giant’s hand shoves you into the next braking zone before you know it.You can’t go wrong with either version of the R8. The standard V10 actually feels a bit more sorted and cohesive on the street, its slightly reduced output making it a bit more approachable and less fear-inducing when sharing the road with the unknown and unpredictable. On track, the V10 Plus’ 70 extra horsepower is welcome, and entirely usable. On the street, it can be a bit overwhelming, gathering speed more quickly than you can safely use, requiring the driver to hold back, tempering their aggression with a healthy dose of sanity.

American pricing of the 2017 Audi R8 hasn’t yet been released, as the car won’t arrive on our streets until the spring of 2016, most likely in March or April. European pricing will start at 165,000 euros for the standard V10 model, and 187,400 for the V10 Plus when the car launches for retail sale this fall.

With its high-tech infotainment system centered on the driver, much more daring interior, and familiar-but-sharper exterior, the 2017 Audi R8 is much more than a childhood caricature; it’s a complete driving system. Whether you want a supercar for the daily grind or a subtler, more tasteful (but still murderously fast and sexy) extravagance for the occasional night out, track day, or canyon run, you can’t go wrong with the new Audi R8 – provided, of course, you’re more Stranger In A Strange Land than Starship Troopers.

Next post Hyundai Is Getting Ready To Revolutionize The Hybrid!