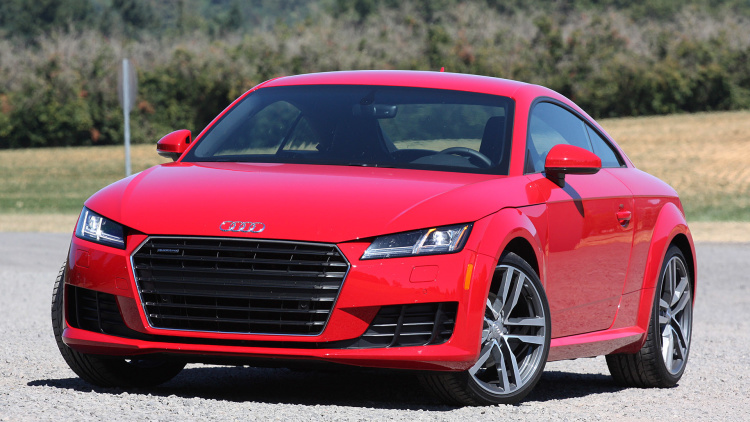 The original Audi TT is a modern style icon. But having a one-time design hit isn’t a recipe for longevity. In order to succeed, you have to bolster style with substance. Thankfully, that’s exactly what Audi did with its third-generation TT.

Now more than ever, the TT is a proper sports car, and it debuts with a host of new technology. The car still looks good, but it’s no longer a one-off masterpiece. Instead, it takes many of the original TT’s elements and incorporates new bits of modern detailing. The shape is all TT – the roofline, the wheel arches – even smaller details like the fuel filler cap and exhaust outlets moved closer to the center of the vehicle pay homage to the original car’s design. But the new car’s face is more angular, more robotic. Park the new R8 next to this TT and the family resemblance is clear.

The TT rides on the same modular MQB architecture as the Volkswagen Golf. The whole package is the same length as before, but the wheelbase is stretched by 1.5 inches. At 3,186 pounds, the TT is only 11 pounds heavier than its predecessor, but thanks to new body components, it’s 25-percent stiffer than the second generation.

We sampled the base TT on the roads of northwest Oregon – that means there’s a 2.0-liter turbocharged inline-four good for 220 horsepower and 258 pound-feet of torque. It’s the same output as a GTI with the Performance Package in a two-door coupe that’s 155 pounds heavier. But stay with us – the magic of Quattro all-wheel drive seriously comes into play here. Launch a TT coupe from a stop and you’ll hit 60 miles per hour in 5.3 seconds. Even the TT Roadster is a firecracker, able to do that same 0-60 run in 5.6 seconds. That 220-hp, front-wheel-drive GTI, by comparison, hits 60 in about six seconds flat.

We didn’t get to drive the TTS, but based on numbers alone, it ought to be a real honey. The S uses the more powerful version of the 2.0T engine from the Golf R, with 292 hp and 280 lb-ft of torque. Zero-60: 4.6 seconds. Hot diggity damn. We’ll test that version in the near future, and we’re expecting good things. But just as Ramsey surmised when he drove the Euro-spec version of the TTS, the added cost might not be worth it.That’s because the base TT is really quite a stunner. It’s got a ton of power, and it all hits you low in the powerband. There’s a robust sound from the 2.0-liter engine as you wind it out, but power drops off quickly. Instead, keep the tachometer needle lower in the range – around 3,500 rpm – and you’ll have the powertrain on full boil.

The best way to experience the TT is with the Audi Drive Select in Dynamic mode. Auto does a good job of predicting your movements most of the time, and Comfort is lovely for long stretches of highway cruising. You can toggle to Individual and choose your own adventure, but really, Dynamic is where it’s at. This puts the variable torque split into a rear bias, making the TT more eager to rotate around a bend. Understeer is nonexistent and this car absolutely hugs pavement. The steering is direct and nicely weighted in Dynamic mode, with far less electronic assist than in the Auto or Comfort settings.

Most importantly, the TT drives like a sports car should. It’s incredibly well-balanced, the steering tune is spot-on for spirited driving, and the Quattro drive system delivers power exactly where you need it, every single time. In fact, 100 percent of the engine’s power can be sent to the front or rear axles if so desired. The overall ride quality is mostly fine, though it can be jarring on rough stretches of road – an easy thing to forgive given the improved dynamics. The TT won’t upset a Porsche Cayman in any scenario, but the Audi is far and away a better driver’s car than aging competitors like the BMW Z4 or Mercedes-Benz SLK.The other big boon for the TT is its onboard technology. We’ve praised Audi’s Virtual Cockpit setup before in prototype form, as well as in the Euro TT and brand-new R8. But as far as this author is concerned, we don’t miss the center-mounted display unit one bit. The key takeaways with the Virtual Cockpit are that it’s easy to use and navigate via the steering wheel or the MMI Touch dial on the center console, and that all passengers have a clear, legible view of what’s going on. During the drive in Oregon, we were able to keep our focus on the road ahead while our co-pilot put on some better music.

This technology will gradually spread across Audi’s range, and it can’t come soon enough. The TT feels so much more technologically advanced than anything else on the road, even cars costing two or three times as much. On top of that, little tweaks like moving the HVAC controls to the center of the vents is a modern, unique touch. It all works well, but does take some getting used to.Overall, we’d say the TT’s interior is mostly lovely. For the driver, it’s a colorful, well-organized place to be, with everything right at your fingertips. For passengers, it’s awfully drab. There’s a huge expanse of open dash directly in front of you, though that does give a commanding view of the road, even in this low-slung, tiny sports car. As before, the rear seats are pretty much useless. They’re better suited for grocery bags, or folded flat to accommodate larger items in the hatch.

Audi will continue to offer the Roadster, but it’s limited to just TT; the TTS will be coupe-only. The tricky part about the TT Roadster is that it carries a $3,500 premium over the coupe, though the wind-in-your-hair experience does feel great with the car’s sportier demeanor. We took one for a brief spin outside of Portland and found it to be just as good to drive as the coupe. The Roadster adds 198 pounds to the TT’s weight, but it’s not noticeable from behind the wheel. The only real difference between coupe and convertible is the lack of trunk space. Aside from the roof that takes 10 seconds to electronically stow behind the seats, of course.

That said, a TT Roadster is almost twice the price of the 2016 Mazda MX-5 Miata, and while it’s got way more tech, more power, and a better interior, it simply isn’t twice the car. We’d have the Miata every single time, no question.The TT Coupe starts at $43,825, including $925 for destination, and the loaded-up model you see here crests the $50,000 mark. The TTS commands an additional $9,000 at $52,825, and while we haven’t driven the US version yet, we have to believe that it’s not going to be a nine-grand-better car. That’s a compliment to the base TT, since the previous version was basically an also-ran once the hotter TTS launched. This time around, we’re left wondering if anyone will really need the more powerful version.

Regardless of model, it’s not easy to make the case for buying a TT. The Volkswagen Golf R has just as much power as a TTS, offers real room for four adults and their stuff, and goes like hell, all for under $40,000. There’s also the Audi S3 sedan, which offers arguably more bang for your buck, for about the same as a base TT.

But that’s always been the case with the TT – you can argue all day about cars that offer a better value. Rational people don’t buy TTs, and for the first time, those customers will be rewarded with a package that drives twice as good as it looks. It’s style with tons of substance, and makes for the most compelling TT yet.