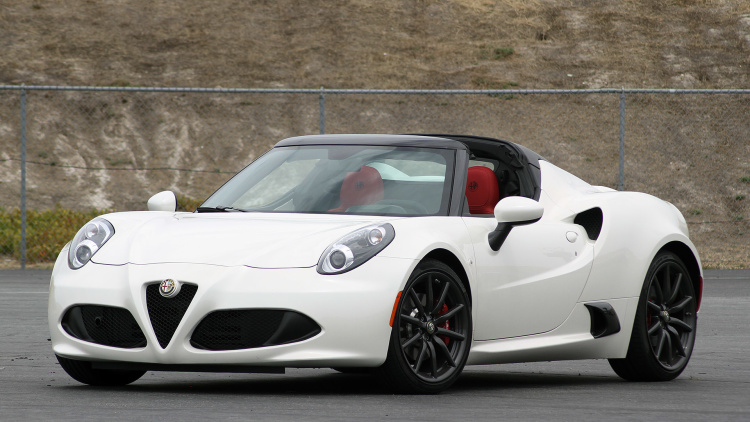 New cars are getting, to quote Alice during her Adventures in Wonderland, “curiouser and curiouser.” Take the Alfa Romeo 4C, a car from a mass-market European brand with supercar-like construction at a price that starts under $55,000. The exotic looks on the outside are countered with an almost pre-war era lack of frills on the inside, but the 4C drives like a street-legal go-kart when you put it to work. That price is either a bargain or a ripoff, depending on your priorities.

This oddity now has a topless variant in the 2015 Alfa Romeo 4C Spider, which is almost identical to the coupe at first glance. On the stat sheet, two numbers separate this open-top car from its closed-cabin sibling. The first is ground clearance, which goes down in the Spider: 4.4 inches here compared to 4.5 inches in the coupe. The second number is 22. That’s how many pounds the Spider gains by losing its roof, for a claimed weight of 2,487 pounds. Alfa Romeo senior product planner Fabio Migliavacca says none of that mass comes from body reinforcement.Alfa Romeo engineered the 4C’s carbon fiber tub to handle convertible duty from the beginning, so the roof on the coupe – made of the same sheet-molded compound as the rest of the body – isn’t a structural member. The Spider’s canvas soft top accounts for an extra 14.3 pounds, making it heavier than the roof on the coupe. And yes, you read that correctly, the Spider comes standard with a canvas top. The optional carbon fiber roof panel costs $3,500. In fact, the options list is so full of woven composite accessories that, during the presentation, one journalist asked if the $1,595 charge for destination and handling could also be had in carbon fiber.

The other 7.7 pounds comes from small alterations. The Spider gets larger mufflers – 11-liter cans here, as opposed to eight liters on the coupe – for a richer exhaust note. The car’s rear haunches are reshaped to be fuller than those on the hardtop, and the engine cover is now a single solid piece, without the coupe’s revealing clear insert.

A few changes on the Spider will come to the coupe, including a pair of cellphone pockets, one next to each seat. The awful Parrot stereo goes away, replaced by a more friendly Alpine unit. Some coupe options are standard features on the Spider, like the full leather interior. Two of the six seat styles and four of the six available wheels are exclusive to the Spider.There’s no performance penalty for affixing the roof; engineers built a lip into the carbon fiber windshield frame and A-pillar that covers the leading edge of the canvas. Top up or stowed, the 160 mile per hour top speed is the same. Installing and removing the canvas takes less than a minute: there are two central pins to pull out at the center of the windshield frame, then you slide two latches over the windows and roll up each half of the roof toward the center (similar to the roof on the Lotus Elise). That bundle can be stowed in a bag provided for the purpose, and it fits perfectly in the tiny trunk. The optional hardtop can’t be stowed in the car.

As we said in our initial test of the 4C, this isn’t a car for the casual fan. It takes irrational motivation to love this car. The first impression with the 4C begins on a sour note with a shrieking chime announcing that you’ve started the car. After that, all you’ll notice is the engine. The 1.7-liter turbocharged four-cylinder sings its machinations right into the cabin, some of which sound harsh. The Spider is an improvement overthe coupe in this respect, because the open air takes the edge off the raspier notes. Yet a steady-state drone inside the car persists during everyday driving. Instead of purring, which we expect from the seductive styling, the 4C intones like a control note for an aural experiment.The solution: punch it all the time. Alfa Romeo is vocal about the 4C’s racing inspirations. Bottom-hinged pedals, for instance, look like they’re pulled from an FIA GT cockput. And like a racecar, the 4C has stiff joints when it’s cold. Velocity instills flexibility, so on a 50-mile drive down the Northern California coast near Big Sur we took every available opportunity to loosen it up. At or above seven-tenths, the 4C is really special.

The unassisted steering turns from tar at low speeds to honey when you’re moving, though it always feels light on center. At full throttle the engine ceases its droning and the concomitant clatterings get swallowed up in a rewarding howl. On one stretch of open highway with three 4C Spiders flying in a sort of agitated convoy, we looked and sounded like some giant killer African bees attacking. The brakes are excellent but take getting used to. The race-style pedal moves so little that it’s response is measure more by force than travel.

For a featherweight car, the 4C Spider dances over messy roads, keeping you on line while the unfiltered steering tells you exactly what kind of mess you’re gliding over. It mimics the coupe experience, except it sounds even better and you get all that wind in your hair.While the hardtop starts at $55,495, the Spider rings in at $65,495 (including destination). The tester you see here stickers for $73,395, which includes extra-cost Bianco Madreperla paint and larger, staggered wheels. In other words, it’s easy to push the car with supercar construction towards supercar prices. And remember the 4C has no back seats, no glove compartment, a wisp of a trunk, HVAC controls from the Fiat parts bin, and compromised everyday manners.

Nevertheless, the 4C has character. It might make as much rational sense as the Cheshire Cat, but if you’d rather stay on the other side of the looking glass, Porsche will sell you a Cayman. Just looking at the 4C Spider inspires the senses, and driving it hard is intoxicating. That might not be enough to overcome the car’s inherent flaws, and it’s not a bargain, but there’s nothing else like it on the road today.