Is This Ford’s Design For The Bronco’s Removable Doors? 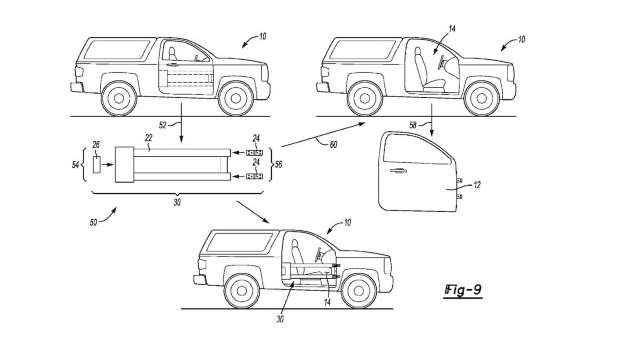 This week, it was reported that Ford had shown off the new Bronco at a recent dealer conference. And while Ford managed to stop photos of its new off-road SUV from leaking out (at least for now), it couldn’t keep all the details it revealed a secret. Sources told Automotive News that the two-door and four-door Broncos they saw had “a retro design,” with round headlights and a rectangular grille. So anyone who was worried the new Bronco would look like the current Ford Everest can breathe a sigh of relief. Interestingly, those sources also claimed the Bronco will come with removable doors and a removable roof, just like the Jeep Wrangler.

Then today, we received a tip that a door-related patent also contained a sketch of the new Bronco. After some digging, we managed to unearth the patent drawings below, which do, in fact, show an off-road vehicle with removable doors. Sadly, it looks more like a two-door pickup truck with a bed cap than what we’d expect a new Bronco to look like. And even if this were Ford’s basic design for the Bronco, it’s far from detailed enough to really reveal much that we couldn’t already guess based on earlier information.

But that doesn’t mean there’s nothing to see. It appears that not only is this a patent for a removable door, it’s a design for a removable door with an impact beam that can also be removed and reattached to the vehicle. So instead of needing to carry or store an extra set of partial doors that you can use to improve crash safety when the full doors are off, you have multiple options with that single set of doors. And since the hinges are modular, you can use them to open and close both the regular doors and the beam-doors.

Regardless of whether we’ll see this feature on the new Bronco or not, it’s a really cool idea. But assuming the idea actually does make it to production, we’re inclined to agree with the dealer who told Automotive News the Bronco they saw “was twice as cool as I thought it would be.”