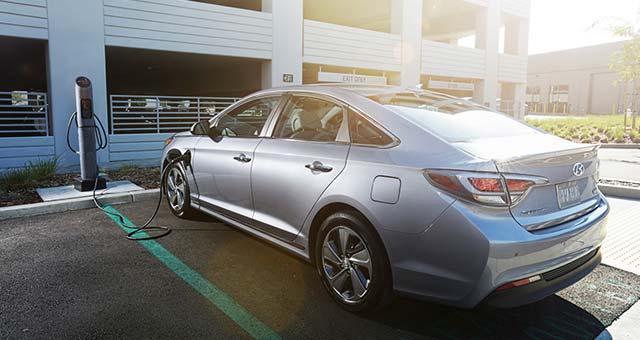 The 2016 Hyundai Sonata Plug-in Hybrid will be built at the Asan, South Korea plant and will go on sale in select markets later this fall.

Sonata Plug-in Hybrid uses a six-speed automatic transmission with Hyundai’s Transmission-Mounted Electrical Device (TMED), a 50 kW electric motor, in place of a torque converter. The 50 kW electric motor is 32 percent more powerful than the motor used the in Sonata Hybrid and allows EV operation at higher engine load and speed. A 2.0-liter Nu four-cylinder GDI engine coupled with the electric motor allows the Sonata Plug-in Hybrid to operate just like the Sonata Hybrid once the onboard battery charge is depleted. Sonata PHEV’s Nu engine produces 154 horsepower and 140 lb. ft. of torque and the total system output is 202 horsepower at 6,000 rpm.

Sonata Plug-in Hybrid uses the same functional design changes as the Sonata Hybrid to improve its drag coefficient to a class-leading 0.24 as well as provide visual cues to distinguish the hybrid models from other Sonatas. Visual changes to the Plug-in Hybrid’s exterior include a charging port on the driver front fender, unique grille, front and rear bumpers, front fenders, front and rear lights, chrome side sill moldings, Hybrid badging and an eco-spoke alloy wheel design. A distinctive instrument cluster provides Plug-in Hybrid drivers with additional information about the Plug-in Hybrid’s functions. A charge indicator is located on top of the dashboard to make it easy to see the state of charge from outside the vehicle.