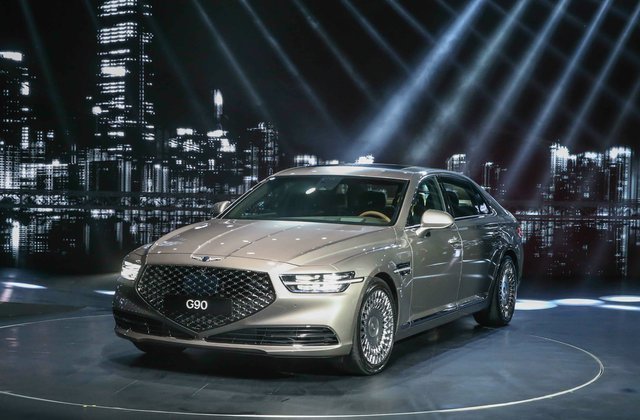 It’s official, the entire Hyundai Group has plans for the New York Auto Show. During the Hyundai Sonata press launch in South Korea, design head Luc Donckerwolke told Roadshow “You’ll have an electric show car for Genesis.” This year will be the charm for Genesis and EVs, after showing the GV80 SUV concept and its hydrogen fuel cell powertrain in 2017, and the electric Essentia coupe concept last year. We will also see the production version of the U.S. market Genesis G90 and its mongo grille.

The premium brand’s debuts will join the new Sonata sedan and Venue crossover, and an as-yet-unnamed Kia show car expected to be our version of the SP Signature concept potentially called Tusker.

Hyundai-Kia isn’t getting its electric razzle dazzle ready for New York alone. Auto Express reports the group is working on a new electric car platform to serve the carmaker the same way Volkswagen’s MEB architecture serves the German group’s brands. At the moment, the only four EVs in the South Korean automaker’s range are the Hyundai Kona and Ioniq, and the Kia e-Niro and Soul. They are all built on ICE platforms, the Kona and e-Niro still proving popular enough for this year’s planned UK-market production to sell out already.

According to a “company insider,” the dedicated EV platform is around two years away and will focus on B- and C-segment cars. That’s the same year that Genesis is expected to have its EV ready, but unless the luxury arm has plans to dip its grille into C-segment waters, Genesis likely has other EV platform plans. By 2025, Hyundai and Kia have said they’ll have 14 EVs in the combined lineup as part of 38 electrified offerings.

Whatever’s on the way could prove far more radical than today’s offerings. Donckerwolke told Auto Express that in order to attract the future EV buyers that aren’t necessarily car people, “[You] have to ask whether you want science fiction or whether you want to conform. We can create something that doesn’t appeal to someone in the traditional sense.”

If the head designer gets his way, 3D-printing will help whip up those attractions. Last year’s Essentia concept showed off 3D-printed carbon fiber ornament, but the potential goes much further. Calling the technique a “game-changer,” Donckerwolke said, “With 3D printing we have to ask things like whether we could print a [seat] fabric that’s thick enough that you don’t need foam.” We’ll find out how far the company takes things for the moment when the New York show opens next month.

Previous post Is This Ford's Design For The Bronco's Removable Doors?