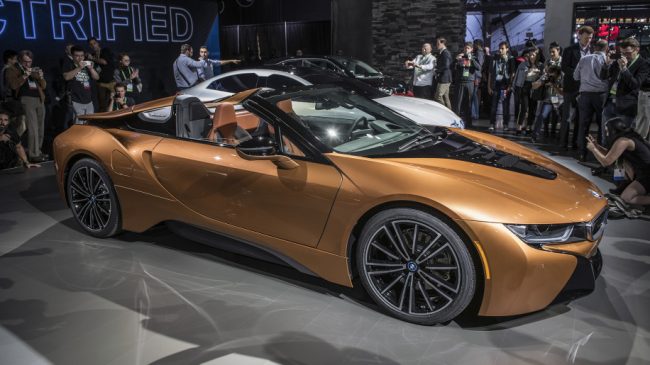 Is “rolling lithium” a thing, yet? Because BMW is trying to make this — the opposite of “rolling coal” — happen at this year’s Los Angeles Auto Show.

The Bavarian vehicular group is showing five all-new electric-powered concepts or production models in L.A. These include the C-Evolution, a 99-mile range scooter from BMW Motorcycles; the 150-mile range, two-door hardtop Electric Concept from Mini; and three vehicles from its advanced i sub-brand: the i3S, a sportier and more potent version of the brand’s electric commuter nodule; the i Vision Dynamics four-door coupe concept, featuring a sporty four-second 0-60 time and a professed 373 mile range; and the long-promised roadster version of the i8 supercar, with just two seats, a bikini top, and an enhanced power pack providing 18 miles of range.

The unveiling of these vehicles in Los Angeles makes perfect sense to us. California is one of the world’s largest markets for luxury automobiles. It is also America’s biggest market for electric-powered vehicles. Studies show that the state’s combination of fiscal incentives, trendsetting cultural positioning, legislative requirements and massive population contributed to the purchase of half of the country’s EVs and hybrids this decade.

“The customers for the brand are mainly on the West and East Coasts, and the California customer especially is interested in sustainability and environmental protection,” said Robert Irlinger, head of BMW’s advanced i sub-brand.

The bigger question revolves around BMW’s larger EV strategy. Given the current global regulatory environment, with its rightful pressures on increasing efficiency and decreasing emissions to help soothe our warming planet and save all life on it, luxury automakers seem to be making a push toward developing a range of battery-powered vehicles to be available around or after the start of the next decade. It seems BMW, with its varied subsidiaries — from lightweight scooters to ultra-luxury barges — is uniquely poised to provide an array of such vehicles.

“In the first stage of i back in 2013, we brought what you could call ‘bookmark’ cars to the market — the i3 commuter and i8 sports car — to show the range of what an electric vehicle could be,” said Irlinger. “Now, we are seeing growing interest from customers to bring electrification to the heart of the brand, even to a sport sedan like our i Vision Dynamics four-door coupe. The technology is improving so rapidly, especially in batteries, allowing us to put more energy in smaller packaging. This allows us to spread electrification even into segments like Mini or motorcycles.”

Considering our current American political administration, the compelling force toward electrification among some of our domestic automakers feels slightly less urgent. Witness their recent campaigns against more stringent fuel economy standards, their over-reliance on the truck market and its guzzling internal combustion engines, the deaccessioning of their European small car production divisions, and their startling lack of electric vehicle concepts here in L.A. or elsewhere.

“We have quite a big market share in EVs in the U.S., which says to us that customers are willing to buy these cars. And we have to deliver EVs to customers wherever they demand them,” Irlinger said. “We predict that globally, by 2025, fifteen to twenty-five percent of the total vehicle market will be pure EVs or plug-in hybrids. And that may be even higher in the U.S.. Of course this broad range is based in large part on regulation — who will make or change the regulations in their state or country.” The trajectory seems undeniable, but the specifics of that part remains somewhat unpredictable.