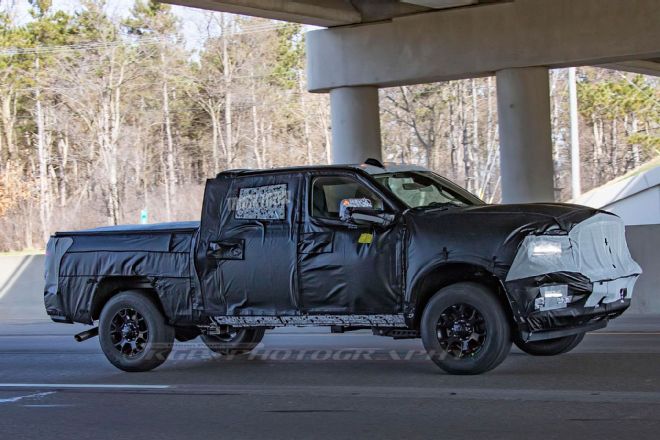 The folks at FCA have kept the next-generation Ram Heavy Duty trucks well-covered up to now. Now, we finally get to see an example of the truck with minimal vinyl wrap camouflage, giving us our best look yet at the 2020 Ram 2500. It has a number of design cues taken from Ram 1500, but it has a number of distinct differences.

At the front, we have a pretty clear look at the 2500’s fascia. The grille shares the same non-crosshair design of the 1500. It’s flanked by wide headlights, and there’s a chrome line that runs along the tops of the headlights and wraps around the top of the grille. Unlike the 1500, the 2500’s grille is much taller, sticking way up above the headlights. It also retains the slightly trapezoidal shape. The headlights also have turn signals that protrude from below.

The rest of the truck is still relatively well-covered. One key detail we can make out is the taillights, which appear to be the same as those used on the 2019 Ram 1500 Tradesman. As such, the bed will likely share cues with the 1500, such as the molded belt line low on the bedsides.

Past spy photos have also revealed that the 2500 will also share the 1500’s sharp interior. We’re expecting to hear more about the heavy duty Ram in the next few months.

Previous post Are You Appearing for Motorcycle Driving Test? A Few Tips to Clear the Test