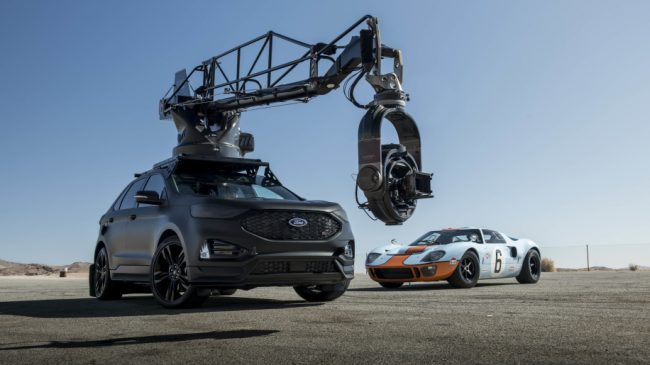 When we drove the refreshed 2019 Ford Edge a few weeks back, we were given a hint that the automaker had something fun planned for the new performance variant, the Edge ST.

Ford teamed up with Pursuit Systems, a group based in North Hollywood, California, to turn the Edge ST into a matte-black camera car. This Edge camera car will work alongside some of Pursuit Systems’ other vehicles, including a BMW X5 M, Porsche Cayenne Turbo and a Mercedes-Benz ML63 AMG.

Camera cars like this need to be able to handle the load of a 1,000-pound roof-mounted crane, carry a load of equipment as well as keep up with whatever vehicle it has been tasked with filming. That’s why Pursuit Systems’ other vehicles are all performance SUVs. The Edge ST might be the straggler when it comes to power, but, with 335 horsepower and 380 pound-feet of torque, its 2.7-liter EcoBoost twin-turbo V6 packs a decent amount of punch.

Changes to the Edge ST include a full roll cage, air suspension, a revised and gutted interior, additional electronics for video monitoring and of course the matte-black finish. Even the headlights and tail lights have to be covered so there’s no light to reflect on other vehicles.